220 Woodcraft Birch Bark Roll manent camp, and it is for these especially that this message is meant. As long as your permanent camp is of real tents or tepees -and close to the ground and hallowed with wood smells, you are getting the big good thing. But as soon as you begin to floor your tent and set up over it a permanent frame and roof, you have taken a step back toward town, a step that will rob you of some good things. It is for these that the Woodcraft cabin was built and is now recommended. For full practical application each gang should as far as possible make their own camp out of material secured by themselves from the surrounding woods or country. A leader is needed who is artistic as well as constructive, and has Woodcraft instincts, because from the very nature ‘of it every camp must be a separate proposition. In Maine, we are free to cut and use all the soft timber we want. In Carolina it would be more or less of stone, but in Texas there is no choice but “Dobies.” The Woodcraft cabin is full of the beauty of the things that grow. It has the glorious smell and magic of the woods. Its every feature stands for a little triumph of the owners over the wide world about. It has all the charms of beauty, personality, conquest and romance. The very fact that every- thing in it was made by the owners’ hands fends a consecra- tion that cannot be got in any other way. Last and largest, it rnay be blessed with the crowning glory, an open fire. The cabin may, in short, be a wonderful spiritual expe- rience that the bungalow or house can scarcely be. But all of this is providing that the cabin be of true Wood- craft construction; not one of those hideous machine-made things ground out by the mile and sold by the foot, that are sometimes called ‘‘cabins.”’ Roosevelt was a good Woodcrafter and he is credited with a saying that sums. up the spirit of Woodcraft, if we assume the outdoor surroundings. It is, “Where you are, with what you have, right now.” The Woodcraft League has found many sympathetic friends in the Y. M. C. A., and when E. M. Robinson showed his belief in the Woodcraft Way by asking us to set up a Woodcraft Cabin, a Woodcraft Council Ring and a Wood- craft Toilet in the woods at Blue Ridge to show at the great May Assembly, it was an opportunity not to be let slip. 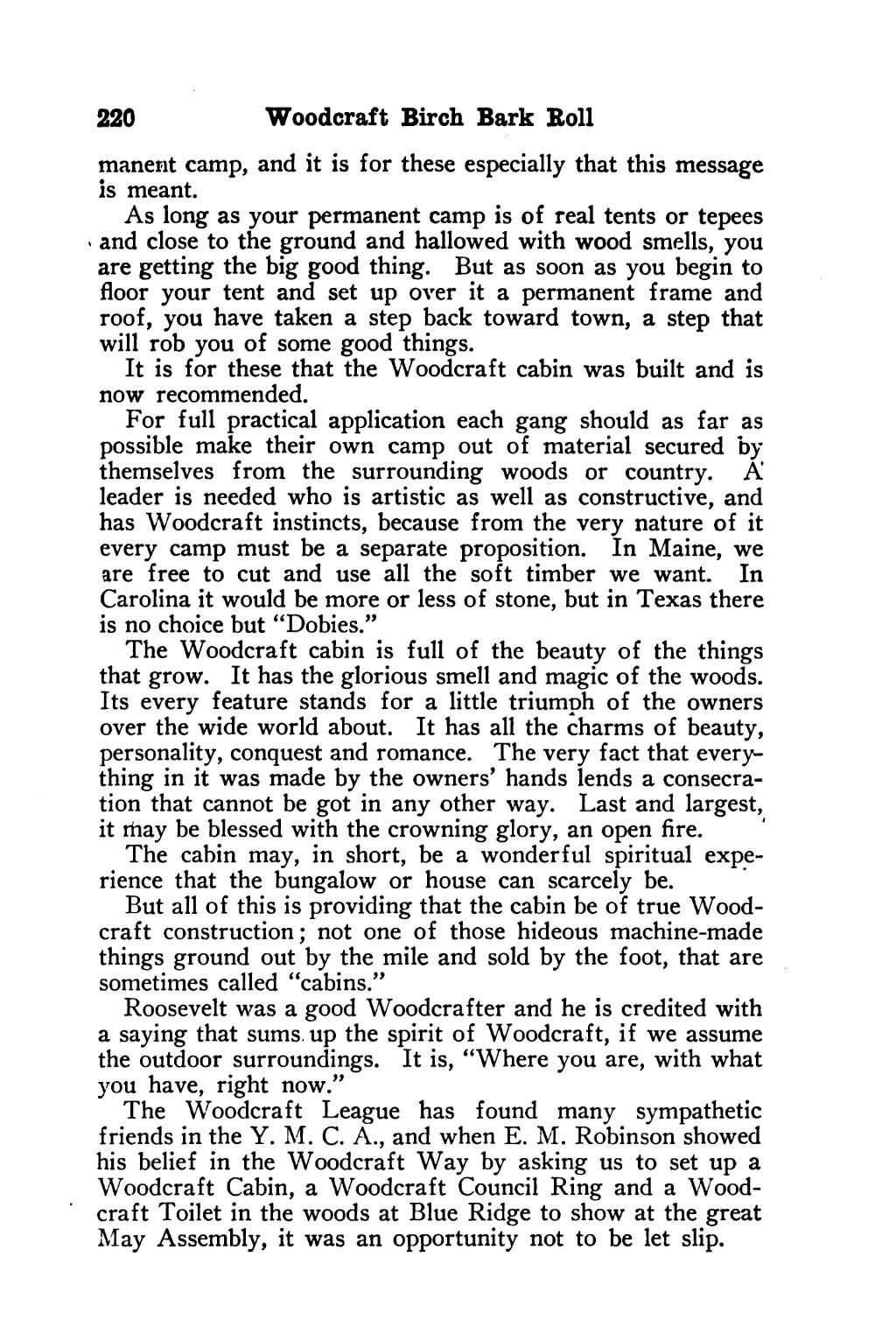