56 Woodcraft Manual for Boys The game. Each boat has a base or harbor; this is usually part of the shore opposite that of the enemy; or it obviates sdl danger of collision if the boat starts from die same side. The sturgeon is left by the referee's canoe at a point midway be- tween the bases. At the word "Go!" each boat leaves its base and, making for the sturgeon, tries to spear it, then drag it by the line to the base. When both get their spears into it the contest becomes a tug of war until one of the spears pulls out. The sturgeon is landed when the prow of the boat that has it in tow touches its proper base, even though the spear of the en- emy is then in the fish: or it is landed when the fish itself touches base if it is also in tow at the time. The boats change bases after each heat. Matches are usually for one, three, or five sturgeon. Points are counted only for the landing of the fish, but the referee may give the decision on a foul or a succession of fouls, or the de- linquent may be set back one or more boat-lengths. Sometimes the game is played in canoes or boats, with one player as spearman and crew. Rides: It is not allowed to push the sturgeon into a new posi- tion with the spear or paddle before striking. It is allowed to puU the sturgeon under the boat or pass it around by using the line after spearing. It is allowed to lay hands on the other boat to prevent a col- lision, but otherwise it is forbidden to touch the other boat or crew or paddle or spear or line, or to lay hands on the fish or to touch it with the paddle or oar, or touch your own spear while it is in the fish, or to tie the line around the fish except so far as this may be accidentally done in spearing. It is allowed to dislodge the enemy's spear by throwing your own over it. The purpose of the barbs is to assist in this. It is allowed to run ontoiht sturgeon with tle boat. It is absolutely forbidden to throw the spear over the other boat or over the heads of your crew. In towing the sturgeon the fathom-mark must be over the gimwale — at least six feet of line should be out when the fish is in tow. It is not a foul to have less, but the spearman must at once let it out if the umpire or the other crew cries "Fathom!" The spearman is allowed to drop the spear and use the paddle or oar at will, but not to resign his spear to another of the crew. The spearman must be in his boat when the spear is thrown. If the boat is upset the judge's canoe helps them to right Each crew must accept the backset of its accidents. 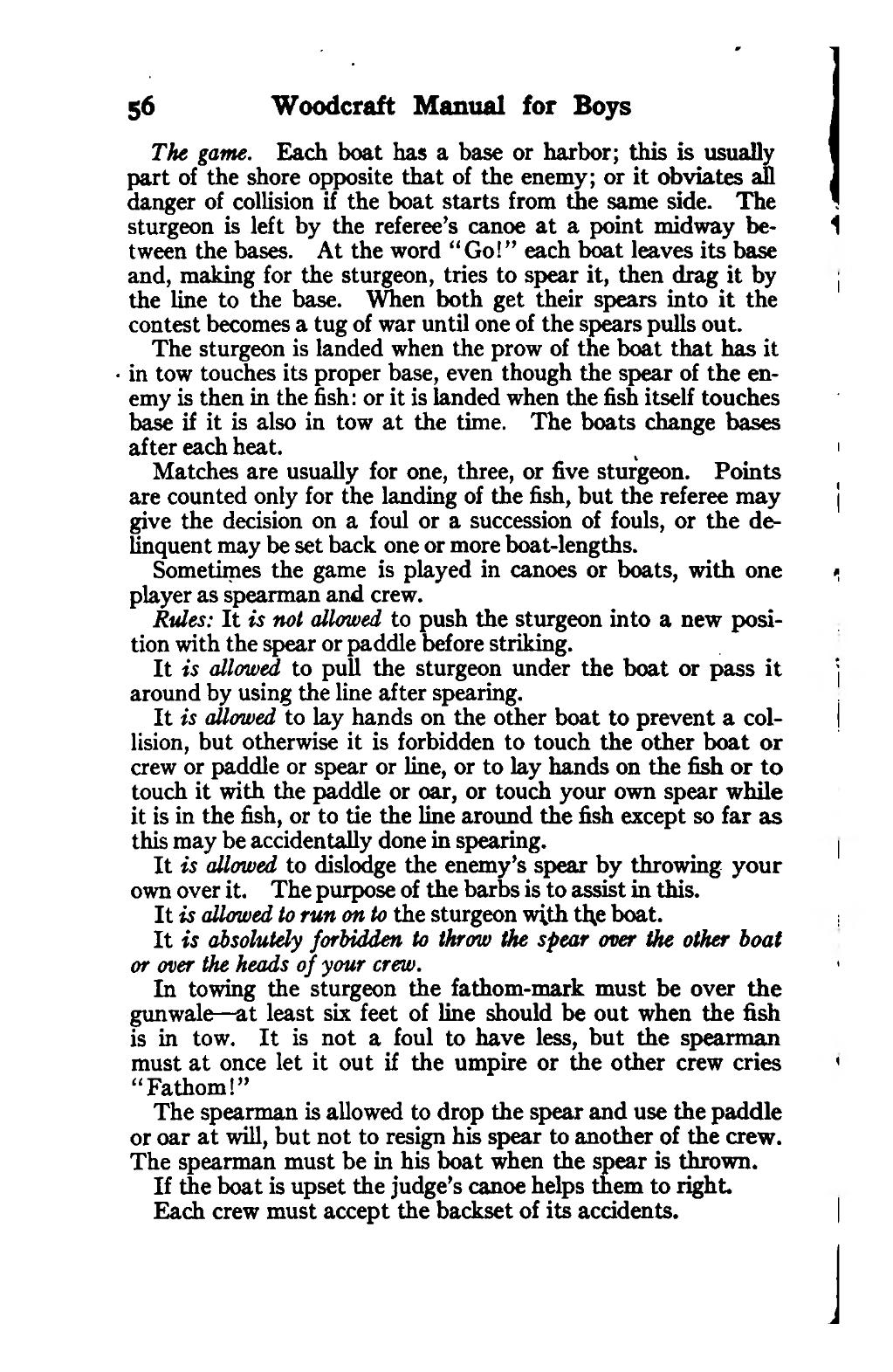