made of a sack stuffed with hay, decorated at one end with a smaller sack for head and neck, and set on four thin sticks. The side of the deer is maiked with a large oval, and over the heart is a smaller one. Bows and Arrows only are used to shoot this deer. A pocketful of com, peas, or other large grain is now needed for scent. The boy who is the deer for the first hunt takes the dummy under his arm and runs off, getting ten minutes' start, or until he conies back and shouts "readyl" He leaves a trail of com, dropping two or three grains for every yard and making the trail as aooked as he likes, playing such tricks as a deer would do to baffle his pursuers. Then he hides the deer in any place he fancies, but not among rodts or on the top of I a ridge, because in one case many arrows would be broken, and in the other, lost The hunters now hunt for this deer just as for a real deer, either following the trail or watching the woods fOiead; the best hunters com- bine the two. If at any time the tTMl is quite lost the one in charge shouts "Lost Trail/" After that the one who finds the trail scores two. Any one giving a false alarm by shouting "Deer" is fined five. Thus they go till some one finds the deer. He shouts "Deer I " and scores ten for finding it. The others shout "Second," " Third," etc., in order of seeing it, but they do not score. The finder must shoot at the deer with his bow and arrow from the very spot whence he saw it. If he misses, the second hunter may step up hve paces, and have his shot. If he misses, the tiiird one goes five, and so on till some one hits the deer, or until the ten-yard limit is reached. If the finder is within ten yards on sighting the deer, and misses his shot, the other hunters go back to the ten-yard limit. Once the deer is hit, all the shooting must be from the exact spot whence the successful shot was fired. Ashotin thebigovalisa WywowA(j;thatscoreSj^iie. A shot outside that is a scrakk; that scores two. A shot in the small oval w heart is a heart wound; it scores ten, and ends the bunt. Arrows which do not stick do not count, unless it can be proved that they passed right through, in which case they take the highest score that they pierced. 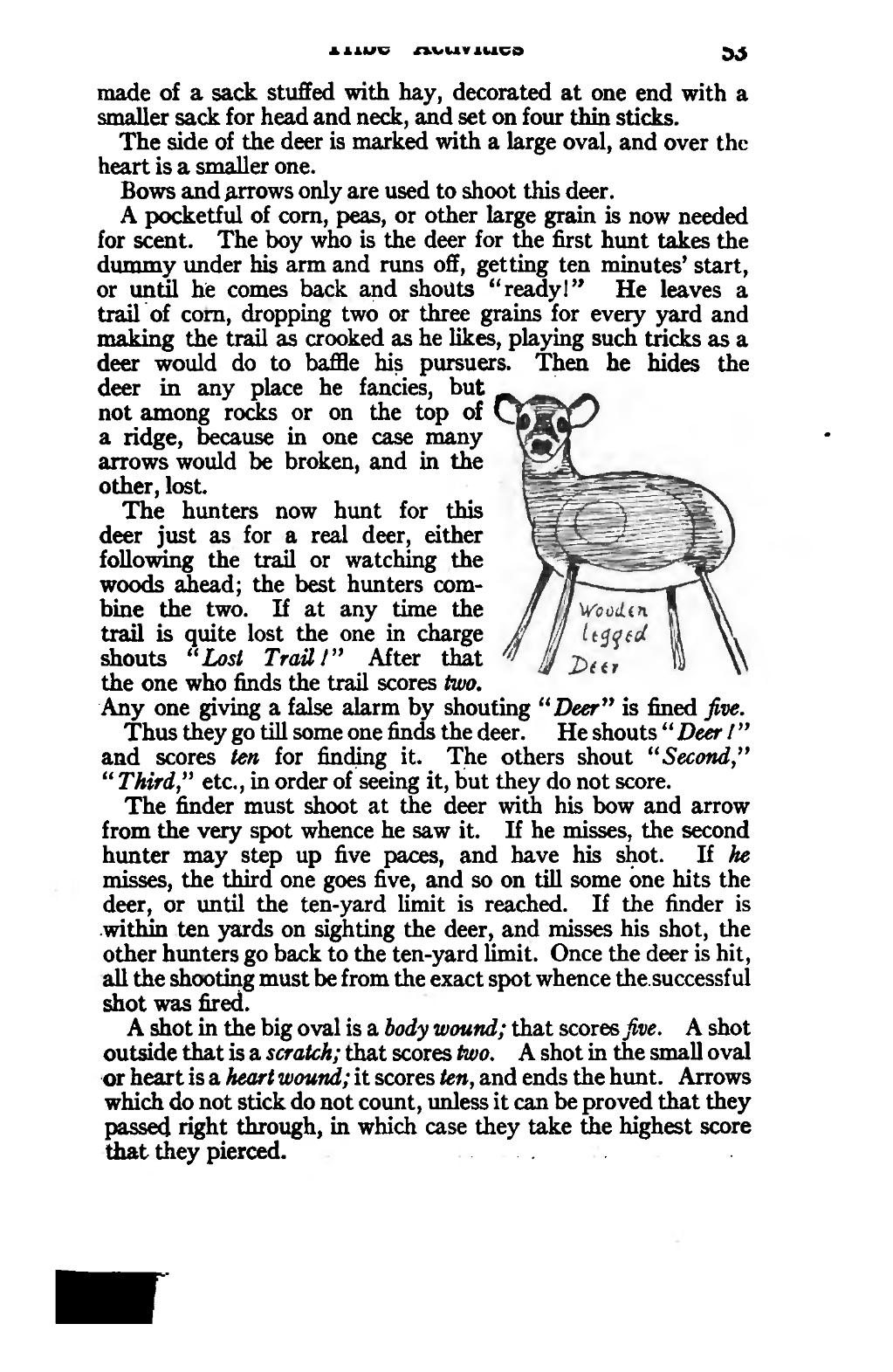