inch plank of any light wood, and from this cut a disk three inches across, bevel off and round the edges. Bore a hole (about three fourths of an inch) in the middle, and put this on the top of the bamboo, so that it sets against a shoidder or knot. Drive a circular plug in the hollow of the bamboo for a wedge, and make all secure with one or w«eacTv dtik |.^Q yg^ ^jj jjg^jlg driven in (No. ^0 7 7). t Now pad the head an inch thick with the ordinary horsehair stufiing that is used in furniture, and bind Fftiiih««( W€A«t all with strong burlap, sewing it at f^Q i the seams, and lashing it around the bamboo with string (No. 8). This completes the dry land spear. If for use in the water, make a final cover out of rubber cloth. This keeps the spear dry. A completed spear weighs about one and one half pounds. Each tribe should have a half-dozen of these spears. They serve a niunber of purposes, some of them quite different from that originally intended. I have seen a good many campers try tilting on the land or on the water and make an utter fauure of it, by reason of the absurdly clumsy, heavy spears used. A green sapling was cut for handle, and the end tied up in a bundle of rags that was i8 inches through. This was hard enough to lift, when dry, and as it usually soon fell into the water and got sopping wet, its weight became trebled, and one could not use it as a spear at all. Indian Leg Wrestle The contestants lie flat on their back on the ground or floor, facing in opposite directions, and lying side by side. They then lock arms and as the judge counts one, two, three they each raise the leg next to their opponent so as to be ready when the official says "three" to lock legs. Each tries to turn the other over backward. The one who succeeds in doing this wins. The game is to win two out of three rounds. Navajo Feather Dance An eagle feather hung on a horsehair, so as to stand up- right, is worked by a hidden operator, so as to dance and caper. The dancer has to imitate all its motions. A marionette may be used. It is a great fun maker. 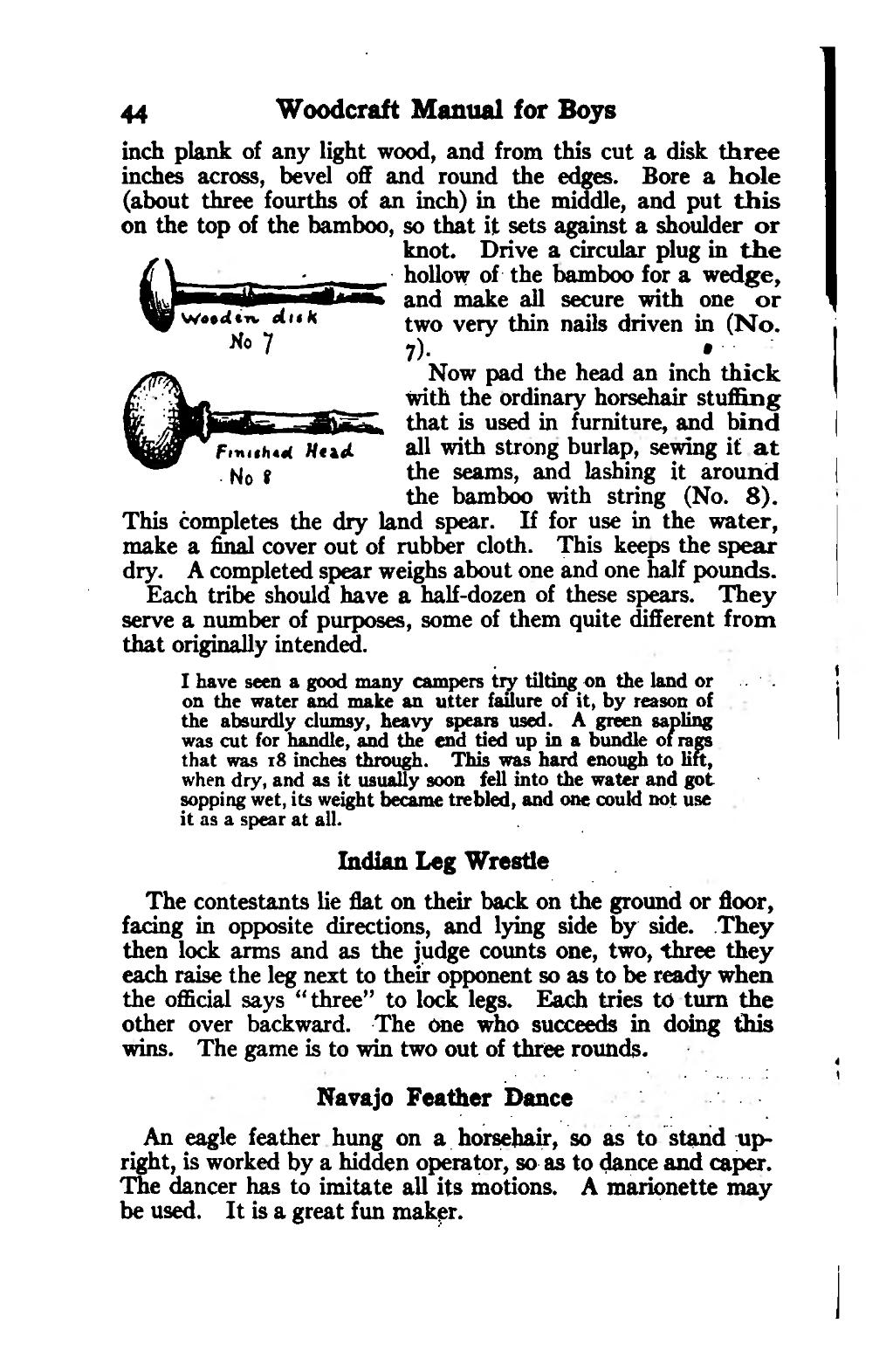