"It now remains to vote for or against the admission of this member, and to the end that there may be no hindrance to freedom of speech, the candidate is asked to leave the Council and roam in the distant woods, till this matter shall have been decided."

In the discussion all the Tribe may take part, but only the Band interested may vote; for the member enters the order by joining a Band. In the voting one blackball is enough to exclude. If the candidate is voted down it is wiser to defer the announcement till a later Council and meanwhile let the unlucky one know privately of the decision. In case the favorable unanimous vote is given the two backers go out into "the woods" and return with the successful candidate.

Standing before the Guide in open Coimcil he shall be questioned and instructed, so he shall know more fully of the sacred purpose of the League. Then the Guide shall say: "Is it your serious wish to become a member of the Woodcraft League?"

"We have already learned that you are fully qualified in the four proofs of fitness by being over twelve years of age, by learning the law of the Lodge, by (here name the initiation taken), by being found acceptable to the Band you wish to join. Is it not so?"

Answer: (by the officer who knows): "Yes, Chief, I can vouch for the candidate."

"You know our kws; we shall take them one by one.

"Do you promise obedience to the Council? "

(And so, through the twelve laws, whereby the member is bound to obedience, courage, cleanliness, health-seeking, to cherish the Great Spirit's gifts; and to service, kindness, fair-play, joy, silence, reverence, honor.)

"And what are the four lights from which these laws do emanate?"

Answer: "They are Fortitude, Beauty, Truth, and Love"

"And whence did these four receive their light? "

Answer: "From the Light of the Central Fire which is the emblem of the Great Mystery by which we symbolize that all Good comes from the one Great Source."

The Guide then says: "Raise your hand and say after me: 'I give my word of honor that in all matters of the League I will obey the Chief and Council and the laws of my Tribe, and if at any time I fail in my duty I will appear before the Council, 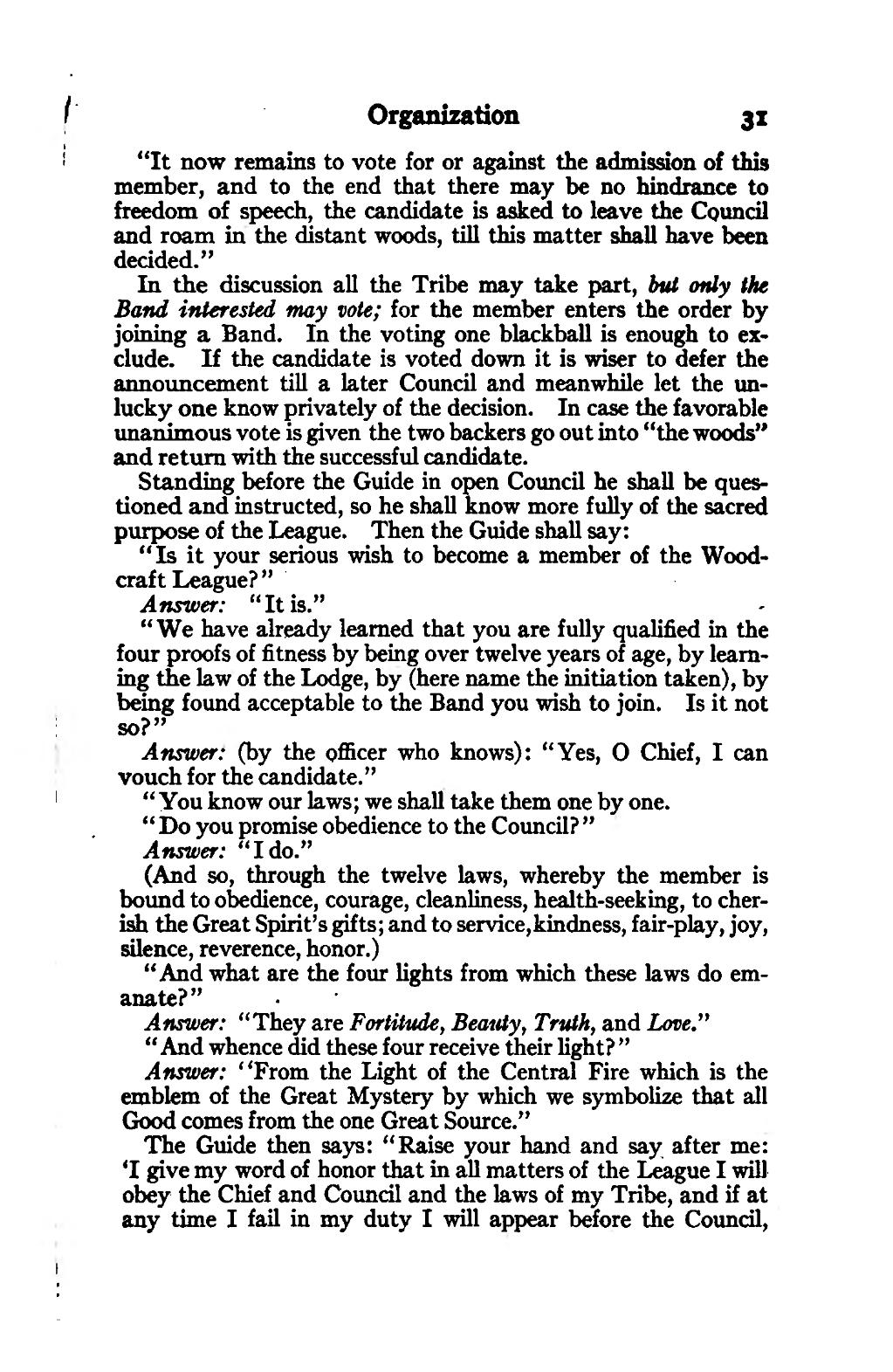