Band Tally and Wampum Collector — A member of a band appointed by the Guide or elected by the Band with the approval of the Guide to act as Secretary for the Band and to collect dues of the members. Reports to the Tribal officers.

Wayseeker — The lowest rank in the Big Lodge.

Pathfinder — The next or second rank in the Big Lodge.

Minisino — The highest rank in the Big Lodge.

Father and Mother Councillor — Adult relative or friend, interested in work, welfare, and support of the Tribe, but not necessarily giving as much time as a Guide.

Sagamore — A member who has achieved twenty-four Coups. Must be at least 14 years of age and a Minisino.

Grand Sagamore — One who has achieved twenty-four Grand Coups.

Sachem — A member who has achieved forty-eight Coups.

Grand Sachem — A member who has achieved forty-eight Grand Coups.

Fire Keeper — A member of a Band or Tribe appointed by the Chief to attend to the Council Fire for any given period.

Watch Lodge — It has been found very valuable in some cases to have a group of selected members of the Tribe who will assist at times when discipline is necessary. This group may be called by any appropriate name, but should be called upon only in emergency.

Band — A group of not less than five nor more than ten members under a Band Chief and a Guide.

Tribe — A group of not less than two Bands, that is, at least ten members, chartered from Headquarters and empowered to confer Badges and Degrees according to the Laws of the Woodcraft Manual under a Chief and a Head Guide appointed by Headquarters. The maximum number in a Tribe is fifty members.

Tribe Committee — A committee of three or more adults who cooperate with the Guide and guarantee the continuance of the tribe.

The symbol of the Woodcraft League is a white shield with blue horns.

That of the Boys' Big Lodge has in addition a blue teepee with a white doorway on it.

That of the Little Lodge has an incomplete circle and a small brown lodge on it.

The crown on the Chief's badge is in each case blue. 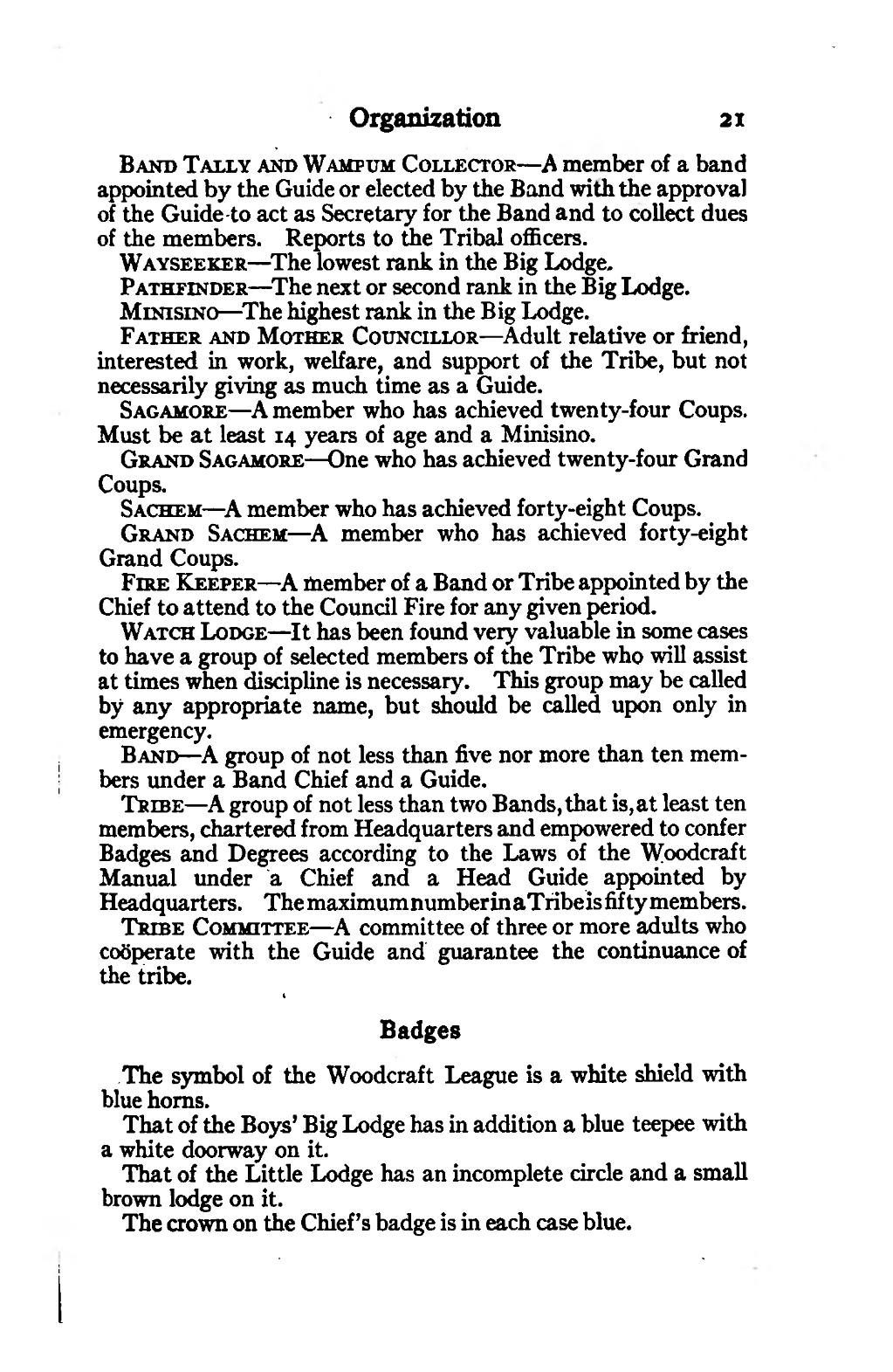