220 Woodcraft Manual for Boys lets out enough light and will not go out in the wind. If you want to set it down, you must make a hole in the ground for the candle, or if on a table, set it on two blocks. (Cut on page 2 :9.) Another style is described in a recent letter from Hamlin Garland: “Apropos of improved camp lights, I had a new one ‘sprung on me,’ this summer: A forest ranger and I were visiting a miner, about a mile from our camp. It came on dark, pitch dark, and when we started home, we could not follow the trail. It was windy as well as dark, and matches did very little good. So back we went to the cabin. The ranger then picked up an old tomato can, punched a hole in the side, thrust a candleu through the hole, lighted it, and took the can by the disk which had been cut from the top. The whole thing was now a boxed light, shining ahead like a searchlight, and the wind did not affect it at all! I’ve been camping, as you know, for thirty years, but this little trick was new to me. Perhaps it is new to you’ H. G. Still another style, giving a better light, is made by heating an ordinary clear glass quart bottle pretty hot in the ﬁre, then dipping the bottom part in cold water; this causes the bottom to crack oﬂ. The candle is placed in the .neck, ﬂame inside. and the bottle neck sunk in the ground. Knife and Hatchet or Whittling and Chopping If I were marooned on an island or left alone in the wilderness, and had the choice of but one weapon to take along, I should take a good knife. If I were allowed two, the second would be a hatchet. With these two one can make most of the things needed for securing food or building shelters. The Northern Indians are probably the best whittlers in the world. They use a curious curved knife called the crooked knife. It is made of an old ﬁle curled up at the point so it can cut a narrow groove. With such a knife a Chipewyan Indian can make bow, arrows, traps, snowshoes, canoe, and wigwam—as well as clothing, his whole outﬁt complete; a good crooked knife, therefore, is a fair start in life for an industrious Indian. Rules for Using a Knife In whittling, always assume that the knife 13 going to slip, there- fore, arrange so it can do no damage when it does slip. . __ 1‘: de‘h. Ik— __/_ 5—} _ ‘3‘. mil.._.-__ _’)1. i. __._ ‘ _ai_ 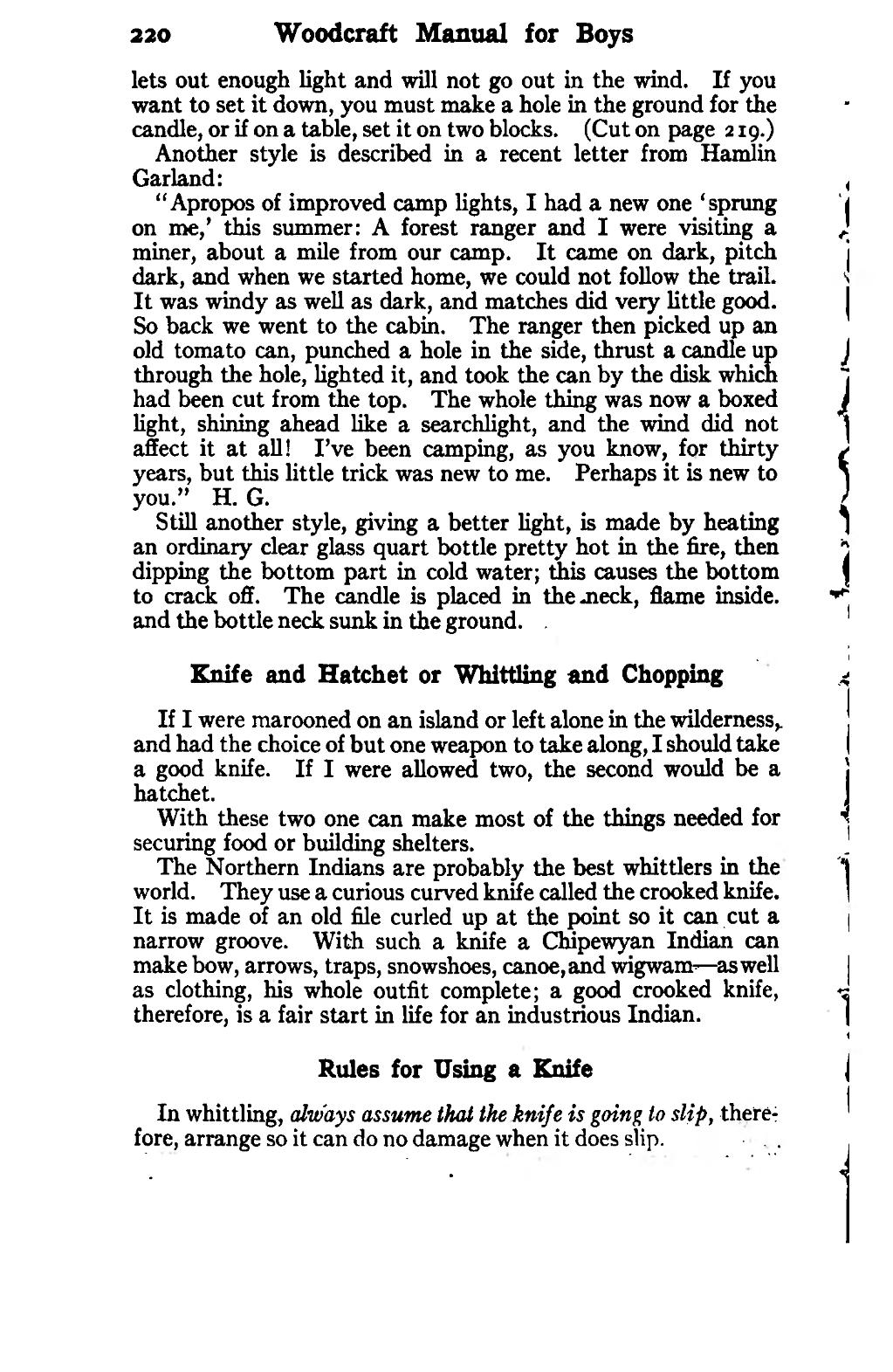