Jhings to Know and Do 2:5 . , ;. Boobs Recommended Tn Lira Hrs'ronms or Non-mean Axum. Two la volumes by Ernest Thompson Seton, dealing with habits of animals, an giving tracks of nearly all. Scribners, 1909. Mutants or m Anmonnacxs, by C. Hart Merriam, M. D. Henry Holt & Co., New York City. Price 82.00 _ Keeping Up the Old Trails There is always great cause for regret when an old road with all its historical interest is abandoned. It was undoubtedly a sad blunder in the Canadian govem- ment when it allowed the Old Cart Trail from Winnipeg to Edmonton (800 miles) and the similar trails to Calgary and Prince Albert to be closed by fences so that the travelling public now pursues a rectangular course, climbing over hills and ﬂoundering through bogs instead of taking the path selected by the pioneers for its easy grades and directness of line. The authorities now begin to realize the magnitude of their blunder when it is too late. In the United States the old Allegheny Crossings and the Overland routes are being made into national highways with- out regard to rectangular survey, guided by an accurate study of natural obstacles as they were in the beginning. In other localities a similar care is manifesting itself in resto- ration and perpetuation of the Old M occasin Trails which are of singular value not only to the historian but to the pedestrian, for they are not only the shortest lines between points but al- ways the most beautiful. In some cases the road was selected in order to go from one noble landscape to another. Such roadways are cheap to make and valuable to every one from the passing lover of scenery to the Forest Ranger on his daily round. The Green Mountain Club (President Will F. Monroe) is doing noble work along this line and should receive the support of every Woodcrafter. It is not too much to say that every famous highway in America to-day was, at ﬁrst, only a moccasin trail through the woods, and that the engineers are indebted to that fact. The Boston Post Road, the Cumberland Gap, the Monterey Drive, Egan ass all bear testimony of the ancient trail-maker. ' .By' a means, then, let us save the Old Moccasin Trails, even if it be only by recording their lines so that a wiser generation may undertake the restoration. 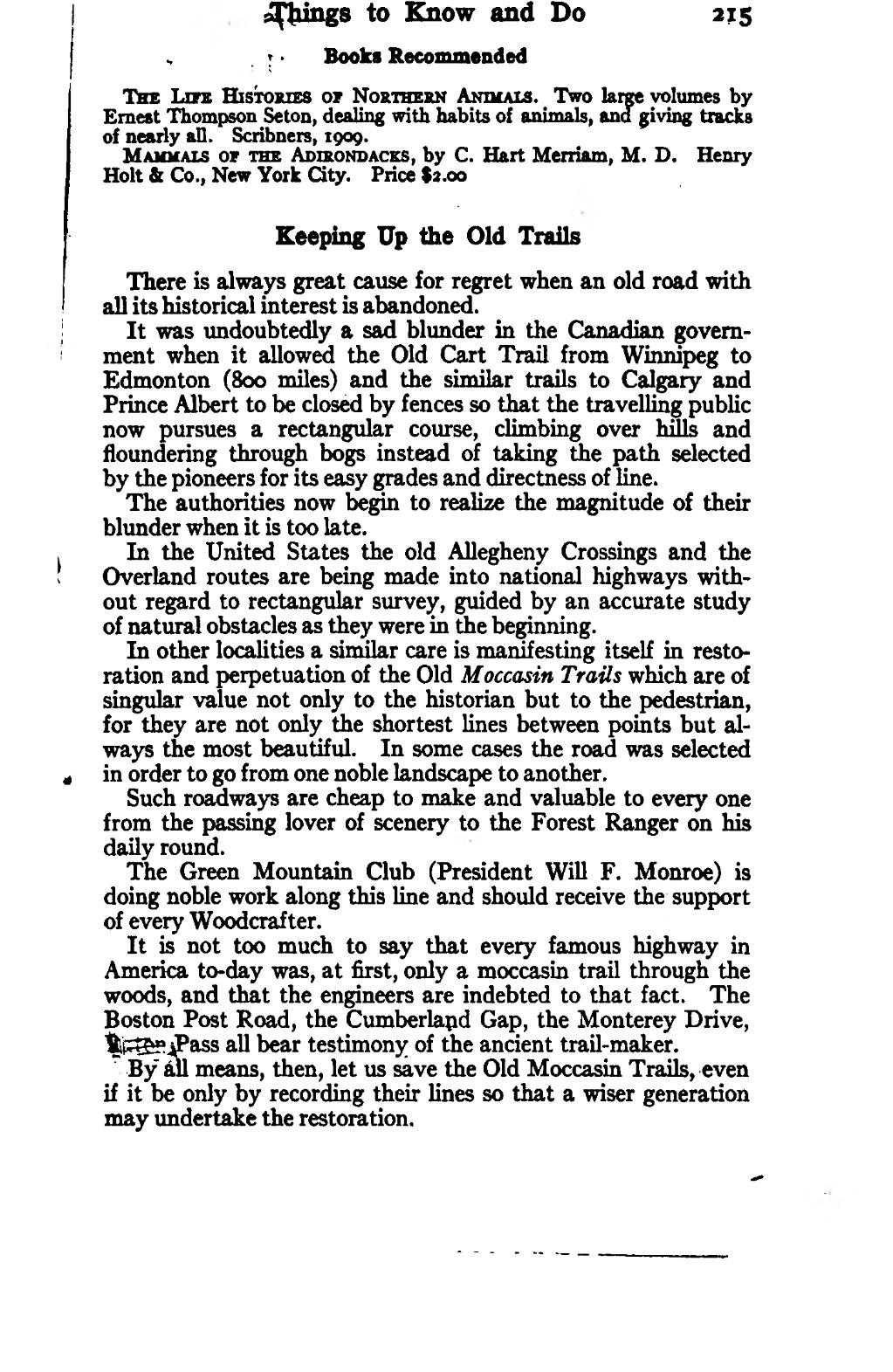