Things to Know and Do 213 the night, ﬁnds them in there, and seizes them before they can escape. M This chapter of grouse history was an old story to the fox and coming near the woodland. edge, his shortened steps showed that he knew it for a Land of Promise. (Illustration I 13.) At C he came to a sudden stop. Some wireless message on the wind had warned him of game at hand. He paused here with foot upraised. I knew it, for there was his record of the act. The little mark there was not a track, but the paw-tip’s mark, showing that the fox had not set the foot down, but held it poised m a pointer-dog pose, as his nose was harkening to the tell-tale wind. Then from C to D he went slowly, because the steps were so short, and now he paused: the promising scent was lost. He stood in doubt, so said the tell-tale snow in the only universal tongue. Then the hunter turnedand slowly worked toward E, while frequent broad touches in the snow continued the guarantee that the maker of these tracks was neither docked nor spindle—tailed. From E to F the shortened steps, with frequent marks of pause and pose, showed how the scent was warming—how well the fox knew some good thing was near. At F he stood still for some time with both feet set down in the snow, so it was written. Now was the critical time, and straight up the redolent wind he went, following his nose, cautiously and silently as possible, realizing that now a single hwdless step might spoil the hunt. Closing In - At G were the deeply imprinted marks of both hind feet, showing where the fox sprang just at the moment when, from ~ the spotless snowdrift just ahead, there broke out two grouse that had been slumbering below. Away they went with a whirr, whirr, fast as wing could bear them; but one was just a foot too slow; the springing fox secured him in the air. At H he landed with him on the prairie, and had a meal that is a fox’s ideal in time of plenty; and now, in deep hard winter, it must have been a banquet of delight. Now, for the ﬁrst time, I saw the meaning of the dead garter snake far back on the trail. Snake at no time is nice eating, and cold snake on a cold day must be a mighty cold meal. Clearly the fox thought so. He would rather take a chance of getting something better. He killed the snake; so it could 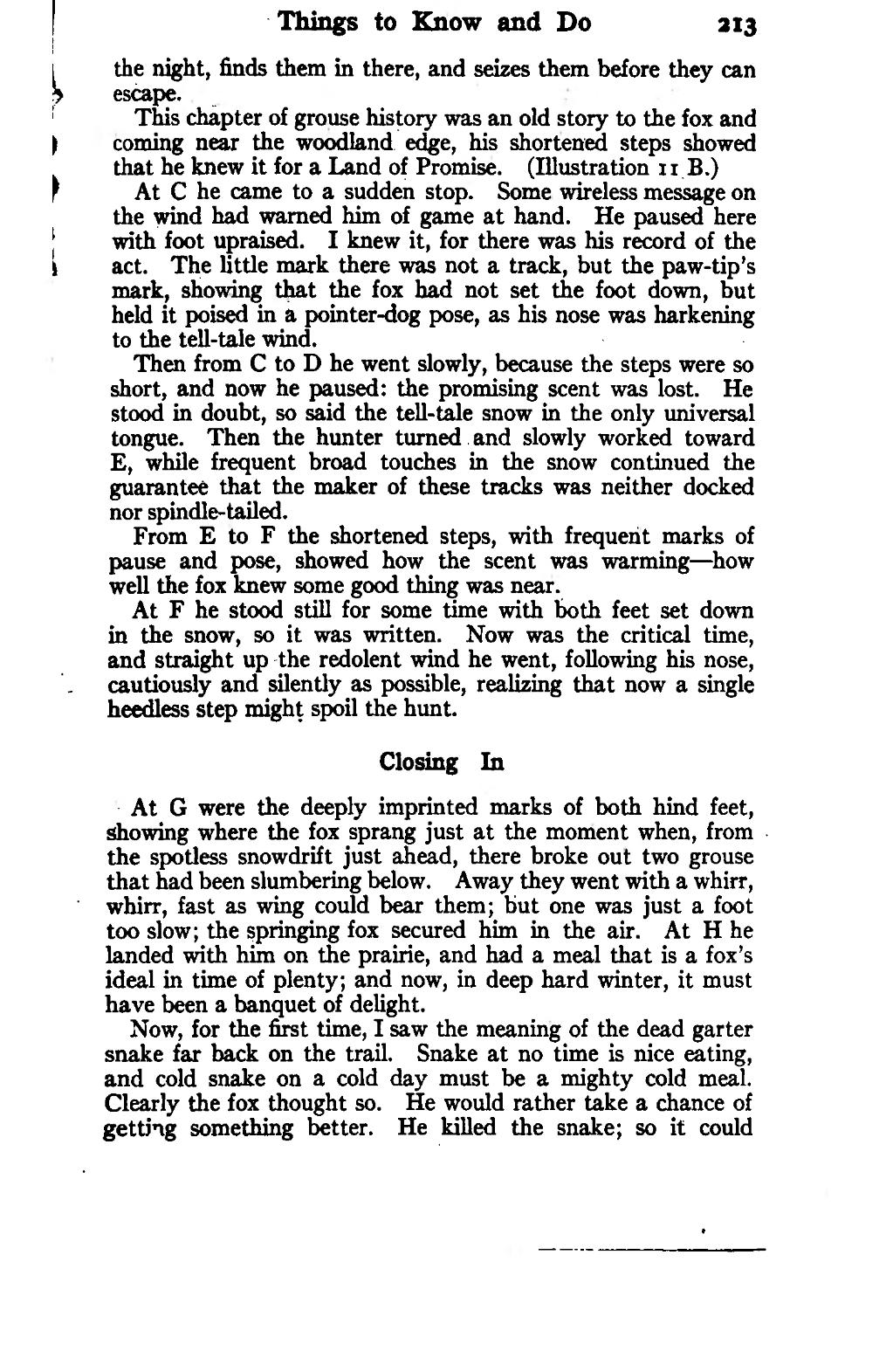