Tribe Activities z 13 and the friends of her youth grew old and wrinkled, her tribes- people grew infirm and feeble with age, but the face of the woman with the trailing foot remained as beautiful, as young, as unUned as when she first met and loved the young hunter who had gone out of her life many scores of moons ago. "And far away in his distant lodge the hunter-husband grew old and weakened in body and mind; his aim was no longer sure, his eye no longer keen, and at his side sat his cousin, she who was once so Ught of foot, so joyous in the dance, so strong and straight and agile, but the years had weighted her once swift feet, had aged her face, had stooped her shoulders, had stiffened her muscles, her ankles, her hands. Old and wrinkled she crouched in her blanket, for her blood ran slowly, her youth was gone — she danced no more. "And one day he returned to look upon her whom he had left, to hear her laugh, and to learn that a true woman's love will keep her young and flowerlike forever. With a great cry he bowed himself before her, and though he was old and feeble and ugly, although he was false and had failed her, and had forgotten her — ^womanlike she outstretched her arms toward him, for was he not the father of her children? "But the Sagalie Tyee (the Almighty) spoke out of the sky. and His word is law to all races, to all people: *You shall not have her again, O Hunter T spoke the voice. *You have been untrue. She has been true. Untruth cannot mate with truth, dishonor cannot mate with honor, falsity cannot mate with fidehty. I, the Sagalie Tyee, chief of the skies and of earth and of the seas, shall place her and her children where their youth and their beauty and their laughter shall forever taunt and reproach your crooked, misshapen heart. They shall never grow old or ugly, and she with her trailing foot shall be- come that most beautiful and graceful thing that I have ever created. Watch the morning skies, O Hunter of the double face, the double heart, and on the first Ught of the rising sun you will see seven perfect things, Beauty, Grace, Laughter, Youth, Fidelity, Love, and Truth — seven glorious things that you have forfeited, have cast aside!' "In the morning the aged hunter sought Kah-lo-ka's lodge. . It was empty, but against the gold of the rising sun there arose a group of seven pearl-white swans. They poised above him for a moment, then winged their way southward. He watched in an agony of loneliness their graceful flight; he listened in an agony of heartache to their clear, wild piping laughter that drifted backward like the notes of a distant flute; his aged eyes 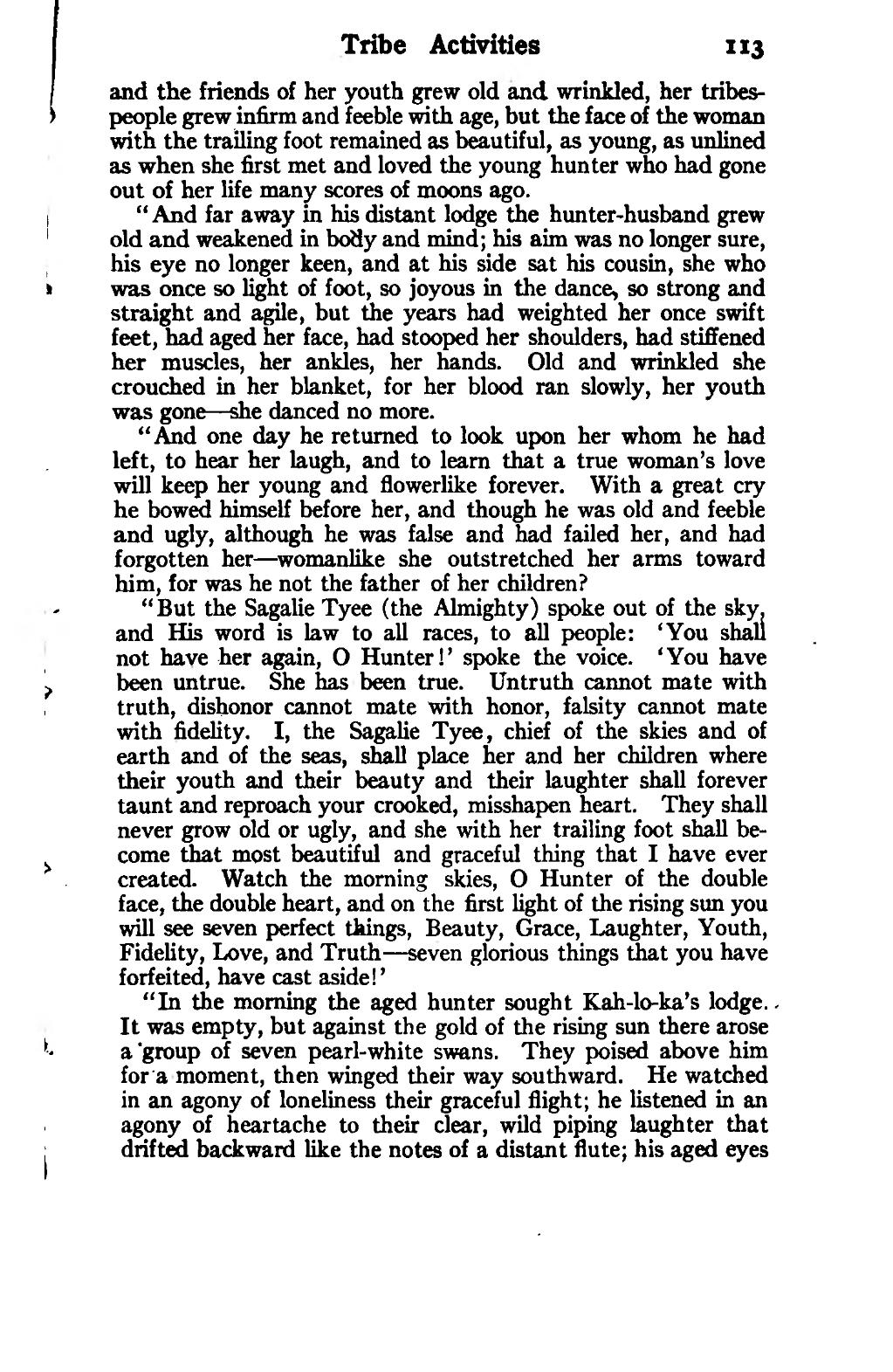