io8 Woodcraft Manual for Boys that it is not time to choose a chief to-night. He must be proven first." The men looked about on each other and knew that the words of Ang were wise. There was no one that they could aU follow without question. The time to choose had not come yet. It came when But that is a tale for another telling. Then Om and Sut and the boys who had followed them were brought into the men's circle by the fire, and they told the story of how they had trapped the buffaloes. It was Sut who told the story, and his eyes shone like stars and his voice bubbled like the brook. As he talked on, Wang would wag his head now and then, as much as to say: "See! Like father, like son." The girls listened eagerly to Sut, but the older ones looked at Om, who sat a little back where the Ught did not shine so bright on his face, and nodded their heads and said to each other: "Some day, perhaps, if the Great One wills." From that time on men began to do things together as they had never done before. They hunted together and fished to- gether. Groups of related and friendly families lived near, as Ang and Wang had done. And they had more to eat and more to wear. Fewer lost their lives in hunting the more dangerous animals. The women and children were safer in the little vil- lages than they had been in their lonely caves and huts. And Om and Sut were remembered in the sagas of the tribe as those who taught men how to live together. The Seven Swans " The Legends of Vancouver," by Pauline Johnson, by permission of pub- lishers, McClelland, Goodchild & Stewart, Ltd., Canada. "Did you ever know a mother who did not love her crippled baby more than all her other children?" asked the old klootdi^ man,* glancing up from her basket-weaving, and for a moment allowing her slender hands to Ue idly in her lap. "One always loves the weak ones," I commented. "We ad- mire the strong, we are proud of the deft, the agile; we applaud the skilful, the clever, but we love the weak." "It is always so," she agreed. "Always so when the one who loves is a mother-woman, and when the weak one is a baby." As she spoke the old klootchman looked away across the canyon; her eyes were very dreamy, and I knew her thoughts were wing- 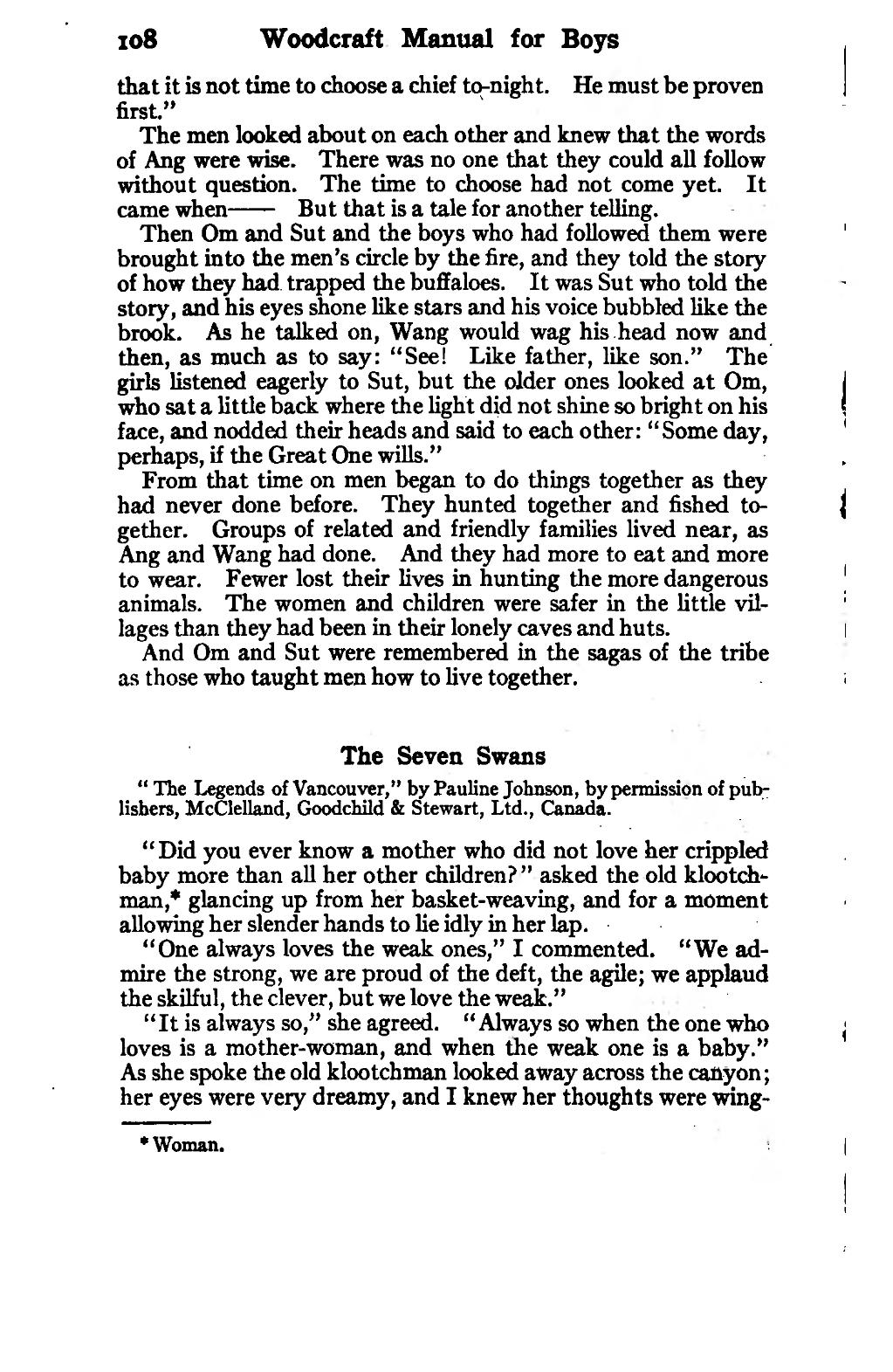