Tribe Activities 107 I have never seen so many men together as now. Men have not been like the wolves, which hunt in packs, or like the bufiPaloes, which feed in droves, or like the ducks and geese, which come and go in flocks. Each man, with his mate, has lived apart like the bear or the lion. There have been fear and hatred between us because each man feared that some other man would spoil his hunt or rob his traps. And we have lived far apart. To-night we sit about the same fire as some of us have sat before at- the feasts of the Great One. As I look into the fire, into the cave of the Red One within it, I see that whenever men come together to hunt, to feast, and there is no hatred in their hearts, it is a feast of Odin. I have told you many times before of the will of Him whose voice I am as I watch the tongues of flame. It is His will that men learn to live together. These boys have heard the whisper in the heart which we have not heard. They have killed more buffak)es since the sun rose this morning than we have done in all our lives and our fathers before us. They have not come to their full strength; they have not learned to shoot as far or as straight as we have done, but together they have done what no one of us could do." Then Ang picked some long grasses from a tuft beside him and took out a single one. Holding it where all could see, he snapped it as if it were a spider's web; then he put two together and snapped them; afterward more and more imtil he had twisted a rope of grass which the strongest man could not break. He passed it about the circle, and each tried in vain to break it. Then Ang took it and held it high above his head where all could see, the women and boys as well as the men. The single grass which the child can br^ is man alone; this rope of twisted grass is man united." A shout of assent broke from the group: "It is the will of the Great Spirit" Then Wang, who had been restless in his place, leaped to his feet: "If we are to hunt together like the wolf, we must learn from him. Each pack has its head which all the others obey. When the geese fly to the south, a great bird who is wise always leads the flock. Let us learn from the beasts and the birds. Who shall be our chief? " They all looked at Ang, and some one said, "Let Ang be our chief." But Ang shook his head: "I have told you for many years the will of Odin. I will do so still as I see it in the fire or hear it in the whisper to the heart, but my eyes do not see as they did, my feet are not so swift in the chase, or my hands so strong at the kilL The head of the wolf pack is the strongest and the most cunning, not the oldest. The whisper within tells me 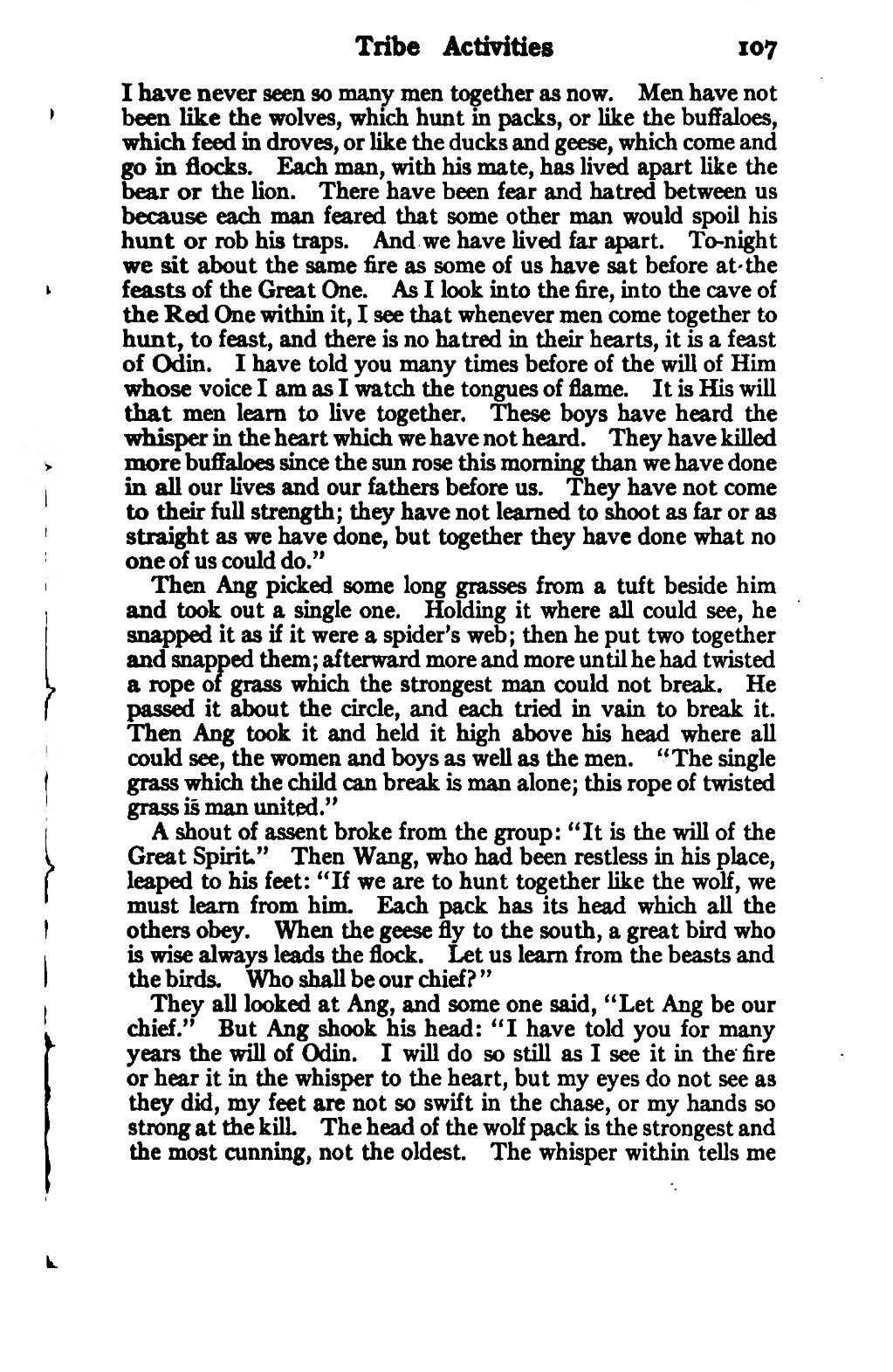