zo6 Woodcraft Manual for Boys the wind would never be in the right direction when the herd was at the small end of the runway. But the delay was a g<x>d thing. The boys learned to hang together and obey the conunands of their chief. One boy nearly lost his life by disobe3dng, but the lesson was learned, and the gang himg together as no boys had ever done since the man-story began. At last the day came when the lookout reported the herd well up in the narrow end of the valley and the wind blowing in. Nothing was said, but by common consent Om was leader for the day. He sent Sut and five other boys to the south, while he and five more went to the north. Each gang was to build a fire where the smoke would not blow up the valley, and dry torch sticks were made ready to light At midday^ when a ^ear driven into the ground cast no shadow, Om shot an arrow high into the air. Each boy seized a torch from the fire and dashed across the mouth of the valley, lighting the dry grass as he ran. It was a wild rush. Never had the boys run as they ran that day. In the years after, they told the tale to their children and grandchildren and they set the pace faster with each telling. In less time than it takes to tell, the boys had spread their net of fire and the wind was drawing it for them. When the boys reached the cliffs, the frightened herd was al- ready crowding up into the narrow end of the wedge-shaped valley, fleeing in terror from the pursuing wall of fire. Then the boys rolled the great stones down upon the seething mass below them, shooting their arrows till the supply was exhausted. The maddened buffaloes trampled on and gored each other until scarcely more than half the herd escaped aUve. The young hunters, exhausted but triumphant, danced along the ledges, filling the air with savage yells. The next thing was to send word to the scattered homes. Three boys were left to keep watch, and the rest ran as if nmning a race to carry the news of the feast that was waiting for all who would come. Before night every man, woman, and child within a distance of twenty imles was on the spot. Old suspicions were foigotten and old grudges ignored, for the time being, at least. A great fire was built, and the men stripped the hides from the dead buffaloes and the women rolled them up to carry away for tan- ning. One of the largest of the bulls was dragged to the fire and roasted whole. Far into the night they worked and feasted. Finally, as they stretched themselves about the fire, exhausted but satisfied, Ang spoke: I have seen the Cold Spirits come and go many times, but 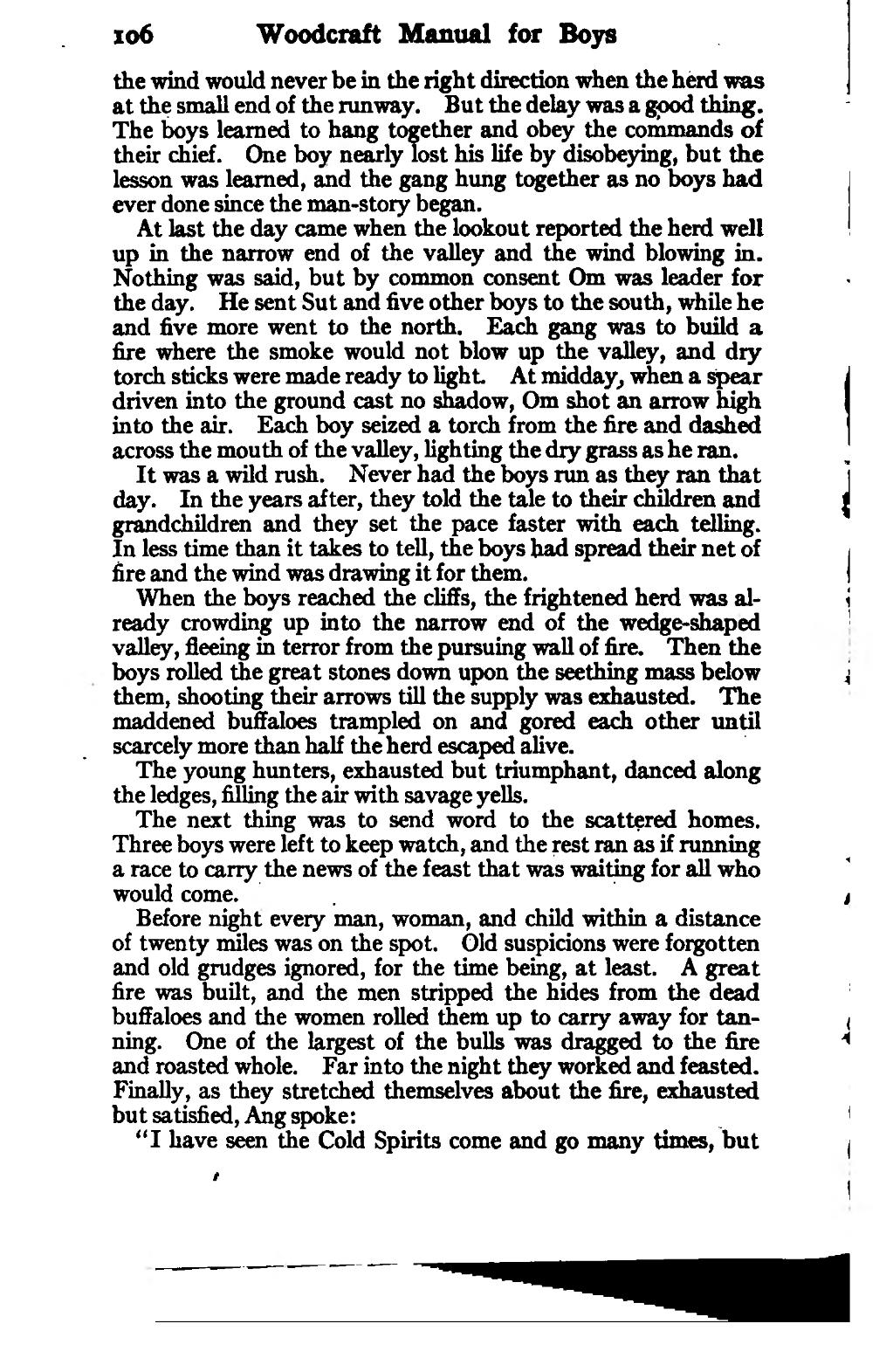