loo Woodcraft Manual for Boys "I have come for you," she answered. "Very well," said Rainbow Youth. He took a handful of her meal and threw it against the large shell, and it stuck fast. "Good!" said he. "It is my own word. I have agreed to marry the girl whose meal stuck to my shell. Your meal has done so. Therefore I go with you." So the two started to the home of Corn-smut Girl. For when a Hopi man takes a wife, he lives with her family. The brothers and the mother of Corn-smut Girl were sur- prised that the handsome youth had married such an ugly girl, but they were glad to welcome him into the. family. When the evening mealtime drew near. Corn-smut Girl went into another room. Soon a beautiful young woman came out and sat with the others to eat. Rainbow Youth wondered why his wife did not join them, but he asked no questions. As bedtime came on, his brothers-in-law explained to him that this beautiful young woman was his bride. Corn-smut Girl. Her dark, smutty skin was really only a mask which she wore during the day. Every day she wore this mask, but at night she removed it and showed her true self to her family. For in truth she was not an ordinary person, but a goddess! Now the girls who had wished to marry Rainbow Youth were angry and jealous, and they made fun of the young man and his dirty bride. But he did not care, for he knew that his wife was resdly more beautiful than any of them. After several years had passed. Corn-smut Girl said that since she was a goddess, it was not right for her to live among mortal people. So with all her family she one day disappeared into the ground. And in the place where she went into the earth the Hopi now pray to Corn-smut Girl as a goddess, begging her to send them good crops of com. The First Gang From "Around the Fire," by H. M. Burr, Association Press. The years went by and Om and Sut were almost men. They had trapped the smaller animals, now and then shooting a deer with their arrows or driving one into a pitfall. But now they aspired to bigger game. They wanted to sit with the men about the campfire, to be treated by the women, and especially . ;by the girls of their own age, as if they were grown up. And • *i^ere was just one way to demonstrate to the satisfaction of 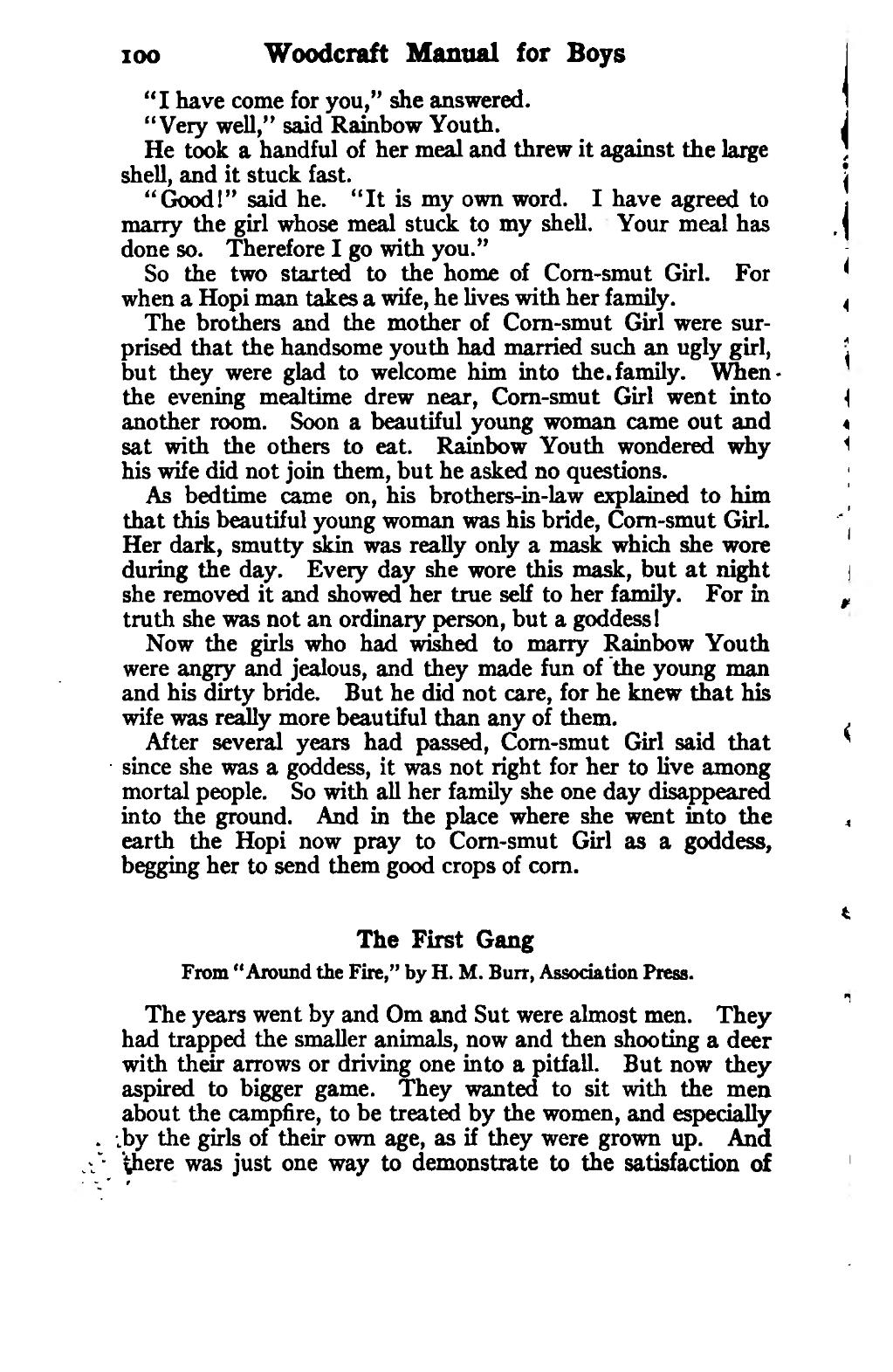