Tribe Activities 97 The Orie^ of the Bluebird* Ninna-bo-Jou, the Sun-god, was sleeping his winter's sleep on the big island just above the thunder-d^ that men call Niagara. Four moons ba,d waned, but still he slept. The frost draperies of his couch were gone; his white blanket was burned into holes; he turned over a Uttle. Then the ice on the river cracked like near thunder. When he turned again it began to slip over the big beaver-dam of Niagara, but still he did not awake. The great Er-6eaver in his pond flapped his tail, and the waves rolled away to the shore and set the ice heaving, cracking, and groaning, but Ninna-bo-jou slept. Then the Ice-demons pounded the shore of the island with their clubs. They pushed back the whole river-flood till the channel was dry, then let it rush down like the end of all things, and they shouted together: "Ninna-bo-jou! Ninna-bo-joul Niima-bo-joul" But still he slept calmly on. Then came a soft, sweet voice, more gentle than the mating turtle of Miami. It was in the air, but it was nowhere, and yet it was in the trees, in the water, and it was in Ninna-bo-jou, too. He felt it, and it awoke him. He sat up and looked about Hb white blanket was gone; only a few tatters of it were to be seen in the shady places. In the snowy spots the shreds of the fringe with its beads had taken root and were growing into little flowers with beady eyes. The small voice kept crying: "Awake; the Spring is coming! " Ninna-bo-jou said: "little voice, where are you? Come here." But the little voice, bemg everywhere, was nowhere, and could not come at the hero's call. So he said: "Little voice, you are nowhere because you have no place to Uve in; I will make you a house." So Ninna-bo-jou took a curl of birch bark and made a little wigwam and because the voice came from the skies he pamted the wigwam with blue mud, and to show that it came from the Sunland he painted a red sun on it. On the floor he spread a scrap of his own white blanket, then for a fire he breathed into parkof life, and said: "Here, little voice, is your wigwam." ittle voice entered and took possession, but Ninna-bo-jou jreathed the spark of life into it. The smoke-vent wings

if ul Bluebird with a red sun on its breast and shirt of white. ' it flew, but every Spring it comes, the Bluebird of the 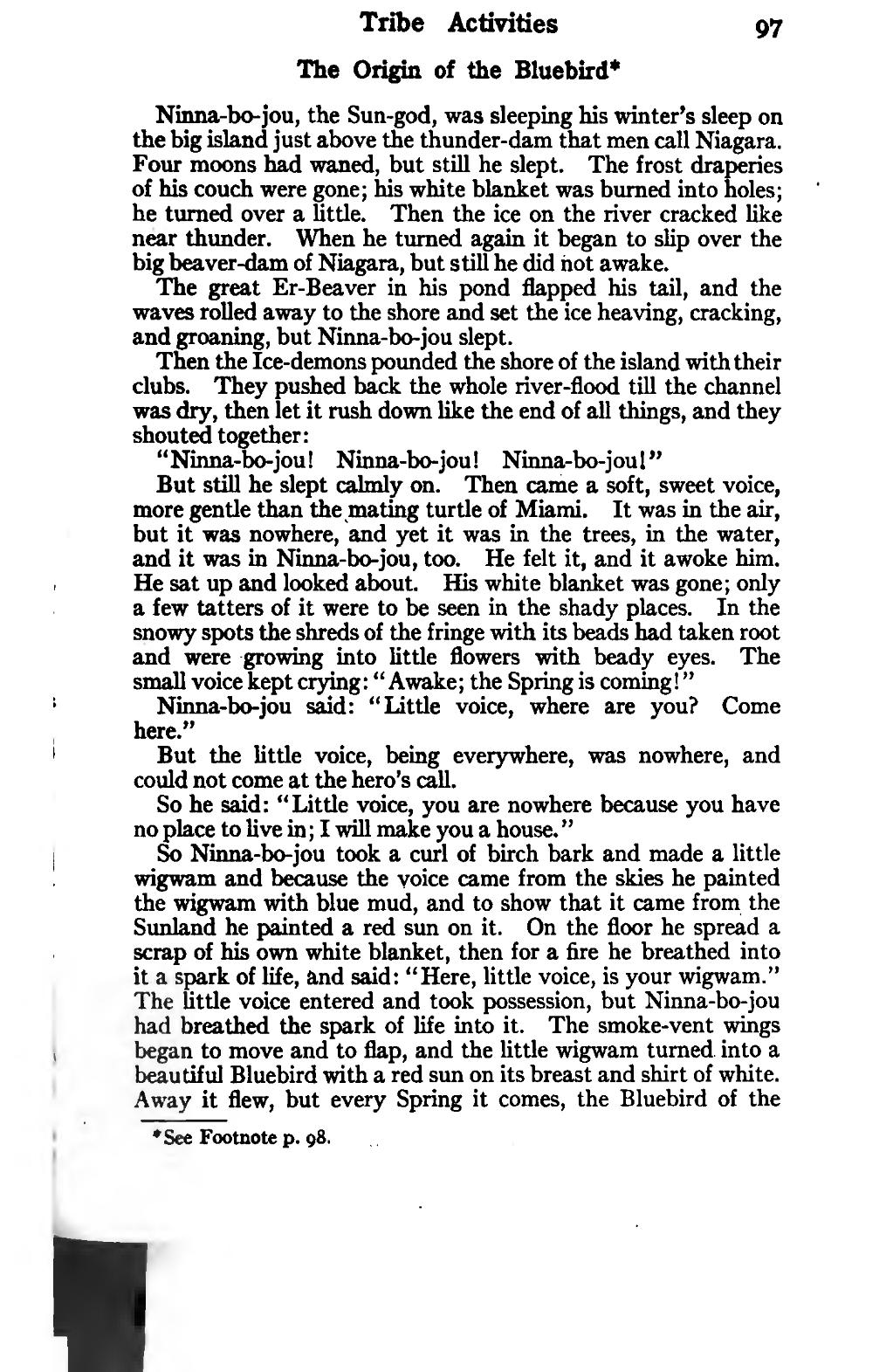