Scoutcraft 9 ought to have a command of polite language. He ought to show that he is a true genfieman by doing little things for others. Loyalty is ? a scout virtue. A scout ought to be loyal to all to whom he has obligations. He ought to stand up courageously for the truth, for his parents and friends. Another scout virtue is self-respect. He ought to refuse to accept gratuities from any one, unless absolutely necessary. He ought to work for the money he gets. For-this same reason he should never look down upon any one who may be poorer than himself, or envy any one richer than himself. A seout's self-respect will cause him to value his own standing and make him sympathetic toward others who may be, on the one hand, worse off, or, on the other hand, better off as far as wealth is concerned. Scouts know neither a lower nor a higher class, for a scout is one who is a comrade to all and who is ready to share that which he has with others. The most important scout virtue is that of honor. Indeed, this is the basis of all scout virtues and is dosely allied to that of seN-respect. When a scout promises to do a thing on his honor, he is bound to do it. The honor of a scout will not per- reit of anything but the highest and the best and the manliest. The honor of a scout is a sacred thing, and cannot be lightly set aside or trampled on. Faithfuiner, s to duty is another one of the scout virtues. When it is d scout's duty to do something, he dare not shirk. A scout i? faithful to his own interest and the interests of others. He is true to his country and his God. Another scout virtue is cheerfulness. As the scout law intimates, he must never go about with a sulky air. He must always be bright and srnillug, and as -the humorist says, "Must always see the doughnut and not the hole." A bright face. and a cheery word spread like sunshine from one to another. It is the scout's duty to be a sunshine-maker in the world. Another scout virtue is that of thoughtfulness, especially to animals; not merely the thoughtfulness that eases a horse from the pain of a badly fitting harness or gives food and drink to an animal that is in need, but also that which. keeps a boy from throwing a stone at a cat or tying a tin can on a dog's tail. If a boy scout does not prove his thoughtfulness and friendship for animals, it is quite certain that he never will be really helpful to his comrades or to the men, women, a. ltd chi?- -h-?n who may need his care. Digitized by ?,?Opg[C 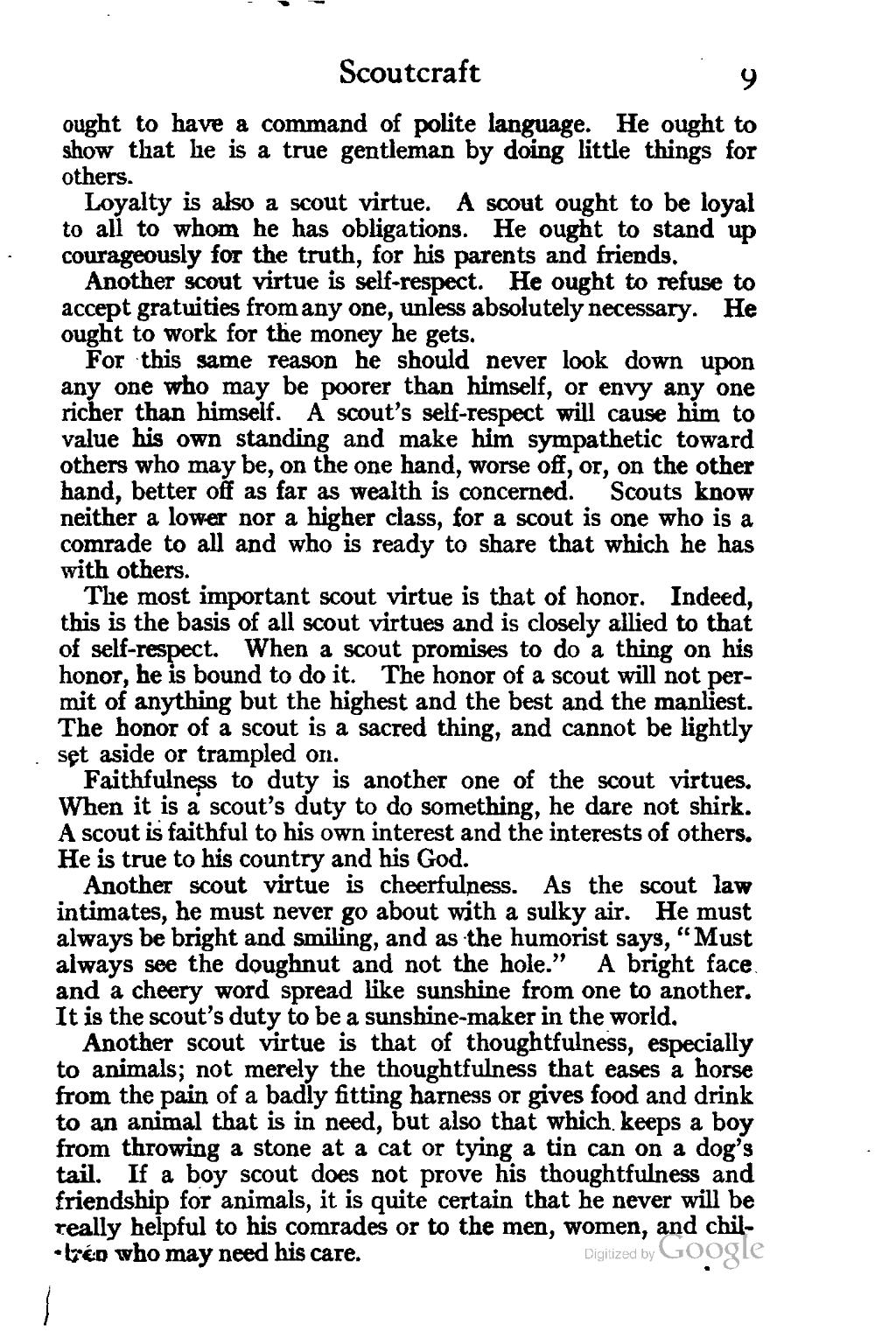