Tracks, Trailing and Signaling with two toes forward and two toes back. But which owl? There were at least three in the valley that might be blamed. I looked for more proof and got it on the near-by sapling t one sm?11 feather, downy, as are all owl feathers, and bearing three broad bars, telling me plainly that a barred owl had been there lately, and that, therefore, he was almost certainly the slayer of the cottontail. As I busied myself making notes, what should come flying up the valley but the owl himseft -- back to the very place of the crime, intent on completing his meal no doubt. He alighted on a branch ten feet above my head and just over the rabbit remains, and sat there muttering in his throat. The proof in this c?e was purely circumstantial, but I think that we can come to only one conclusion; that the evidence of the track in the snow was complete and convincing. Meadow Mouse The meadow mouse autograph (page x89) illustrates theblack- track method. At first these dots look inconsequent and fortuitous, but a careful examination shows that the creature had four toes with claws on the fore feet, and five on the hind, which is evidence, though not conclusive, that it was a rodent; the absence of tail marks shows that the tail was short or wanting; the tubercles on each palm show to what group of mice the creature belongs. The alternation of the track shows that it was a ground-animal, not a tree-climber; the spacing shows the shortness of the legs; their size determines the size of the creature. Thus we come near to reconstructing the animal from its tracks, and see how by the help of these studies, we can get much light on the by-gone animals whose only monuments are tracks in the sedimentary rocks about us t rocks that, when they received these imprints, were the muddy margin of these long-gone creatures' haunts. What the Trail (lives- The Secrets o! the Woods There is yet another feature of trail study that gives it exceptional value --it is an accopnt of the creature pursuing its ordinary life. If you succeeded in getting a glimpse of a fox or a hare in the woods, the chances are a hundred to one that it was aware of your presence first. They are much cleverer than we are at this sort of thing, and if they do not actually sight or sense us, they observe, and are warned by the action of some other creature that did sense us, and so ?.a?se? t_?e_ir occupations to steal away or hide. But th?mow??" 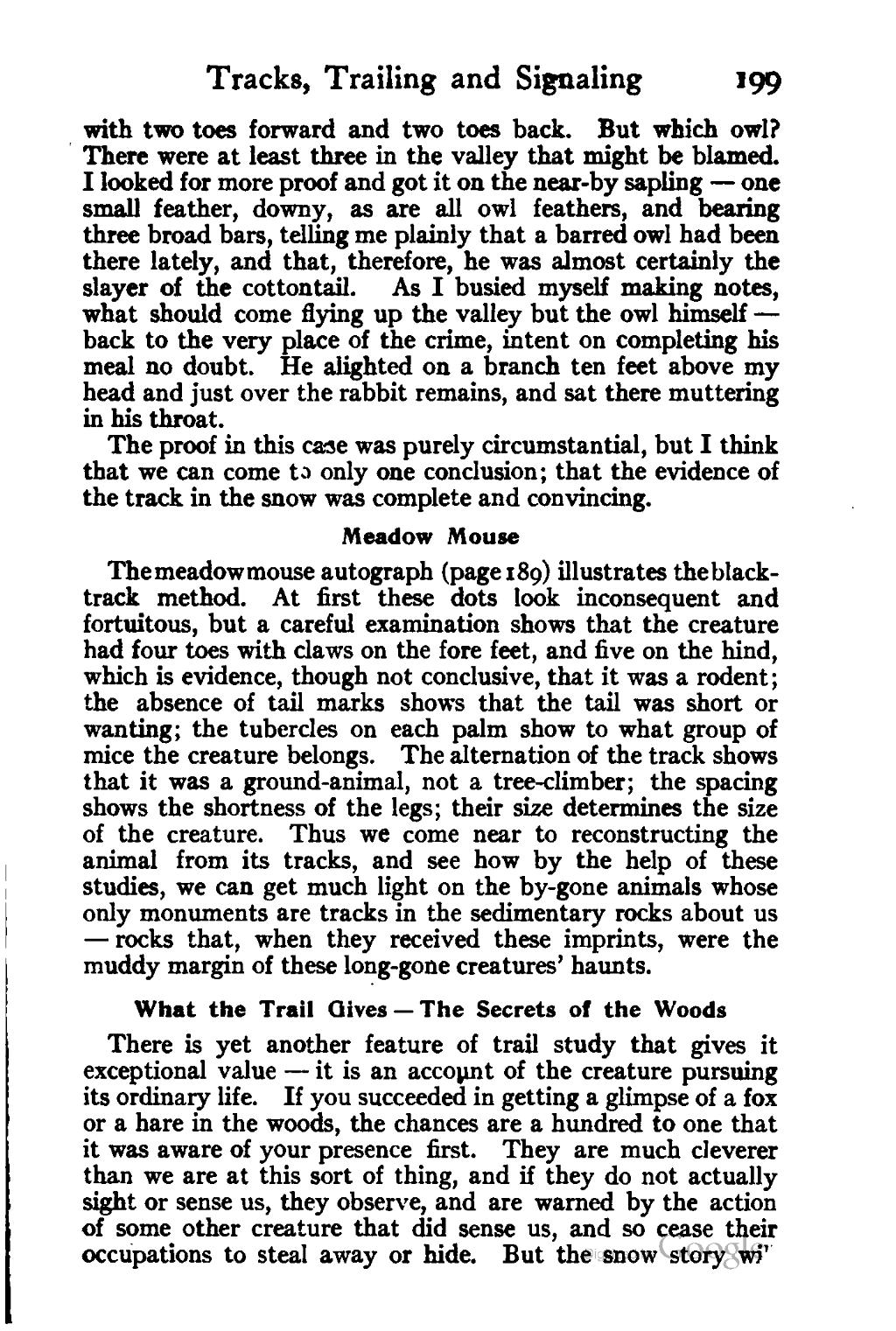