Tracks, Trailing and Signaling ?b7 drawings alone can give everything .you can perceivei bht they fail in authentic size and detail. Photography has this great advantage- it gives the sur- roundings, the essential landscape and setting, and, therefore, the local reason for any changes of action on the part of the animal; also the a?sthetic beauties of its records are unique, and will help to keep the method in a high place. Thus each of the three means may be successful in a different way, and the best, most nearly perfect alphabet of the woods, would include all three, and consist of a drawing, a pedoscript and a photograph of each track, and a trail; i.e., a single footprint, and the long series of each animal. My practice has been to use all whenever I could, but still I find free-hand drawing is the one of the most practical applica- tion. When I get a photograph I treasure it as an adjunct to the sketch. A Story of the Trail To illustrate the relative value as records, of sketch'a'nd photograph, I give a track that I drew from nature, but which could not at any place have been photographed. This was made in February x5, x885, near Toronto. It is really a con- densation of the facts, as the trail is shortened where uninteresting. Page x89, No. 2. At A, I found a round place about $ x 8 inches, where a cot- tontaft had crouched dur/ng the light snow/all. At B he had leaped out and sat looking around; the small prints in front were made by his forefeet, the two long ones by his hind feet, and farther back is a litfie dimple made by the tail, showing that he was sitting on it. Something alarmed him, causing him to dart out at full speed toward C and D, and now a remarkable change is to be seen: the marks made by the front feet are behind the large marks made by the hind feet, because the rabbit overreaches each time; the hind feet track ahead of the front feet; the faster he goes, the farther ahead those hind feet get; and what would happen if he multiplied his speed by ten I really cannot imagine. This overreach of the hind feet takes place in most bounding animals. Now the cottontail began a series of the most extraordinary leaps and dodgings (D,E,F.) as though trying to escape from some enemy. But what enemy? There were no other tracks. I began to think the rabbit was crazy- was flying from an imaginary foe- that possibly I was on the tra/l cff?a.M?tch 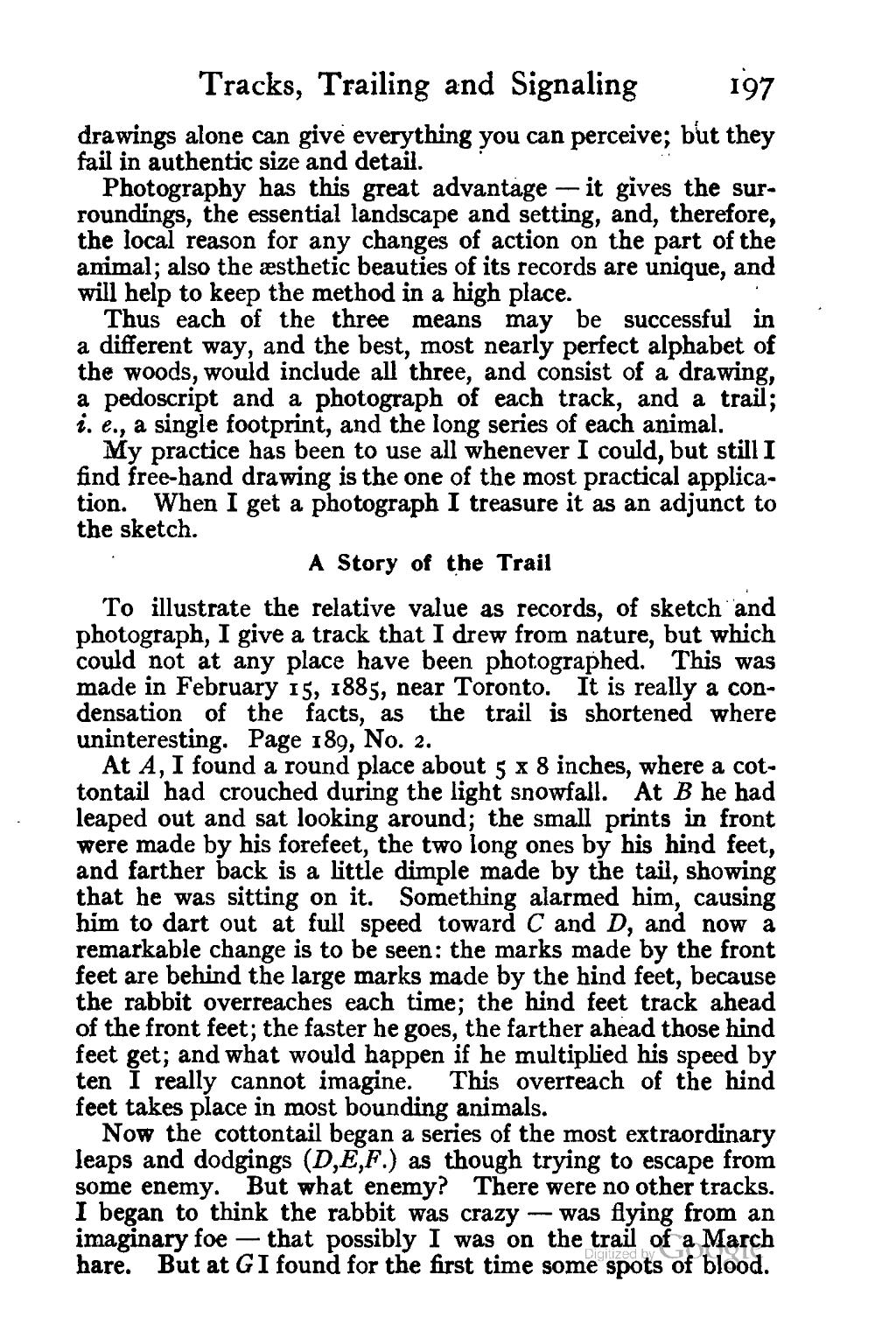