…some, but not too much and not too soon. They’ve got to learn themselves. I reckon if a man’s never made a mistake he’s never had a good lesson. Mistakes is a part of the price of knowledge, but it’s the part you don’t like paying. That’s why you remember it. Don’t save a boy from making his mistakes. He don’t know anything properly because he don’t think; and he don’t think because you saved him the trouble and he never knew how. No! S–– ! If he’s got ter swim, you let him know right there thet the water’s deep and ther ain’t no one to hold him up, and if he don’t wade in and larn, it’s goin’ to be his funeral.”

The key to successful education is not so much to teach the pupil as to get him to learn for himself. The subject to be instilled must be made to appeal — you must lure your fish with a succulent worm, not with a bit of hard dry biscuit. Moreover, as Sir Clifford Allbut lately said to the Association of Science Masters of Public Schools: —

“The British boy, generally speaking, is a very matter-of-fact little person, very serious, very anxious, and very handy. Do we make his seriousness ours, or do we drive him out to his games? Do we attend to his ‘How’ and ‘Why’, or do we tell him that boys should not ask too many questions?”

That was my object in suggesting the gilt of “Scouting” for the pill of education in manliness or good citizenship; but I had no idea when I did so a year ago that it would meet with the response which it has done. Its intention has been recognized. It has been adopted by all the best associations for boys and by a large number of schools. It is also used on more than one of His Majesty’s ships and in several units in the Army.

But a further result which had not been foreseen — at any rate, on a large scale — has been its rapid and widespread development as a separate organization of its own. This, although I had to some extent provided for it, I had not desired, as I believe in amalgamation and concentration of all such efforts for tackling the question with greater weight. But apparently the details of the system have commended themselves to the boys to the extent of their taking it up for themselves and of their looking round for officers to command them, which is rather the reverse of the ..text continues 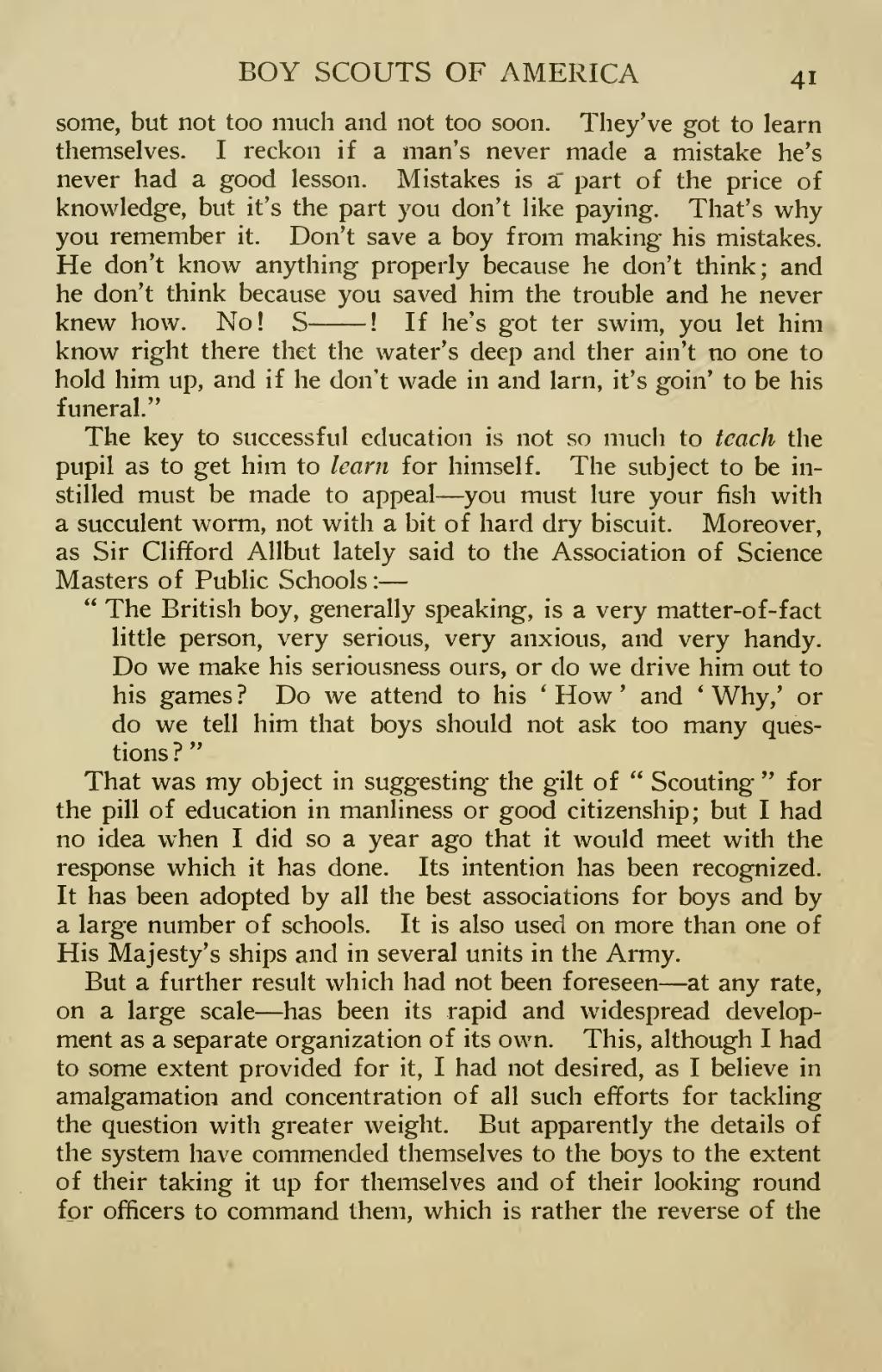