The advantages of learning this method are threefold:

First — Fire-making by friction is an interesting experiment in woodcraft.

Second — A boy is better equipped having learned it. He can never afterward freeze to death for lack of matches if he has wood and an old shoe-lace.

Third — For the very reason that it is difficult, compared with matches, it tends to prevent the boys making unnecessary fires, and thus reduces the danger of their setting the woods ablaze or of smoking the forbidden cigarette.

There is such a fascination in making the rubbing-stick fire that one of my Western cooks, becoming an expert, gave up the use of matches for a time and lit his morning fire with the fire- drill, and, indeed, he did not find it much slower than the usual way.

Walter Hough told me a story of an Apache Indian who scoffed at the matches of white men, and claimed that he could light a fire with rubbing-sticks faster than Hough could with matches. So each made ready. They were waiting for the word " go " when the Indian said :

" Wait. I see if him right." He gave a few strokes with the drill, and called — " Stop — stop — him no good." He re- arranged the sticks, and tried a few more strokes. Just as Mr. Hough was going to strike the match, he said : Stop — stop — him no good." He did this three times before he called " Ready." Then the word " go " was given. The white man struck the slow, sizzling match. The Indian gave half a dozen twirls to the drill — the smoke burst forth. He covered it with the tinder, fanned a few seconds, then a bright flame arose, just before the white man got his twigs ablaze. So the Indian won, but it was by an Indian trick; for the three times when he pretended to be trying it, he was really warming up the wood — that is, doing a large part of the work. I am afraid that, deft as he was, he would have lost in a fair race. Yet this incident shows at least that, in point of speed, the old rubbing-sticks are not so very far behind the matches as one might have supposed.

It is, indeed, a wonder that the soldiers at West Point are not taught this simple trick, when it is so easily learned, and might some day be the one thing to save the lives of many of them. 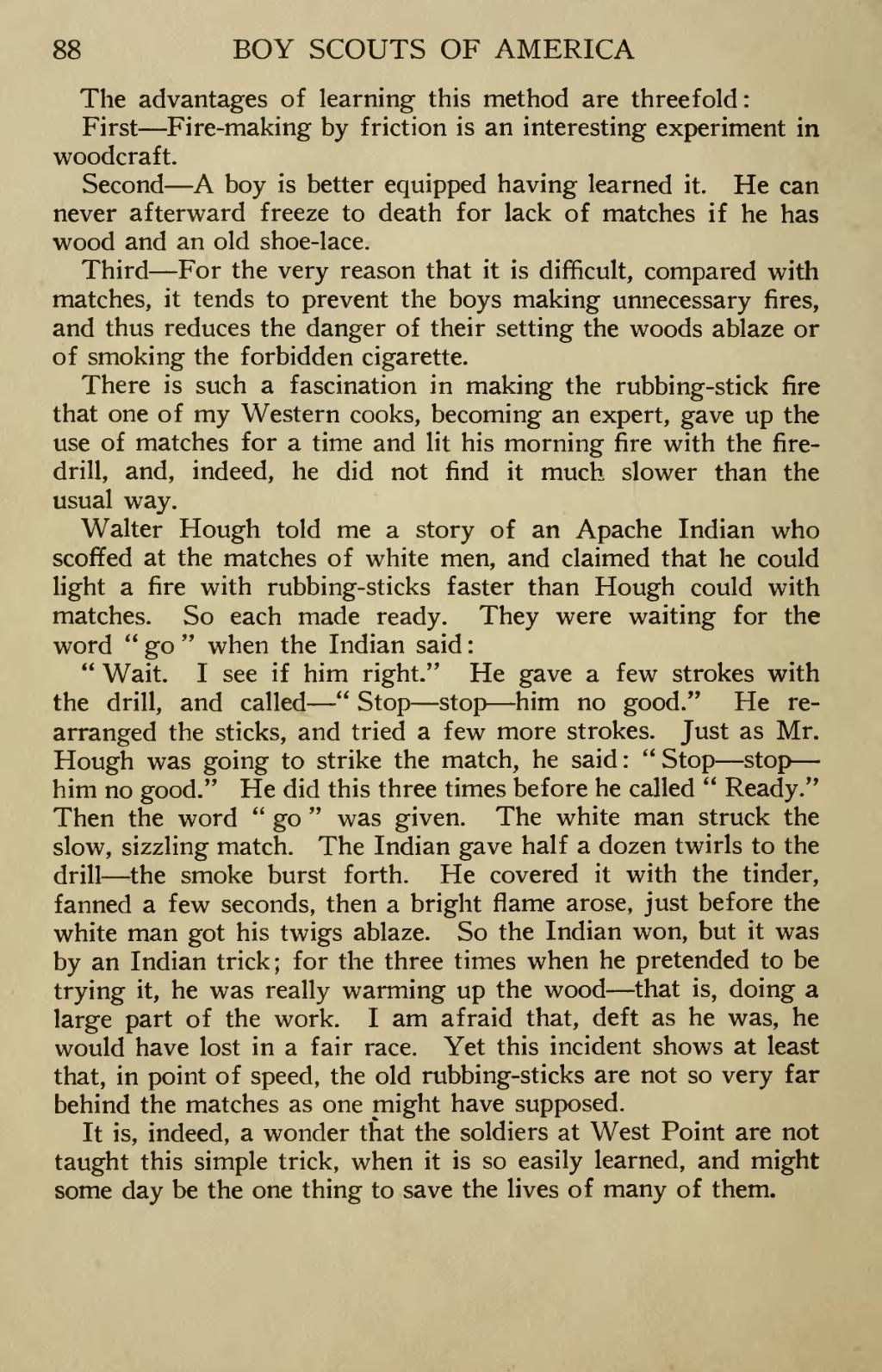