…weeks, he was thrilled to receive not simply a permit to enter the Book Room, but a life membership ticket with the compliments of the Trustees.

Now he began a course of study among the latest and best of Natural Histories, that covered all his evenings and spare hours till the autumn of 1881, when he was ordered back to America, to ward off a complete physical collapse due to overstudy and underfeeding; for all he had to live, clothe and study on, was $150 a year during these two and a half years of lonely life in London. “Hungry but happy days” he afterward called them, but the thought of America once more was thrilling.

In the April of 1882, he arrived in Manitoba, then a newly opened prairie country, and as he says “was born again.”

The ancestral name of his family was “Seton”. The pseudonym “Thompson” was assumed by the family in a time of political trouble. Now, in 1883, soon after coming of age, the naturalist took legal steps to have the original name restored. He, however, used the combined name “Seton-Thompson” as a pename for several subsequent publications.

Health, strength, liberty, and life among the wilds, were the wonderful things that constructed and glorified the new epoch. Daily contact with the primitive Indian, hunting, trapping, farming, camping for four bright years, were now his dream come true. 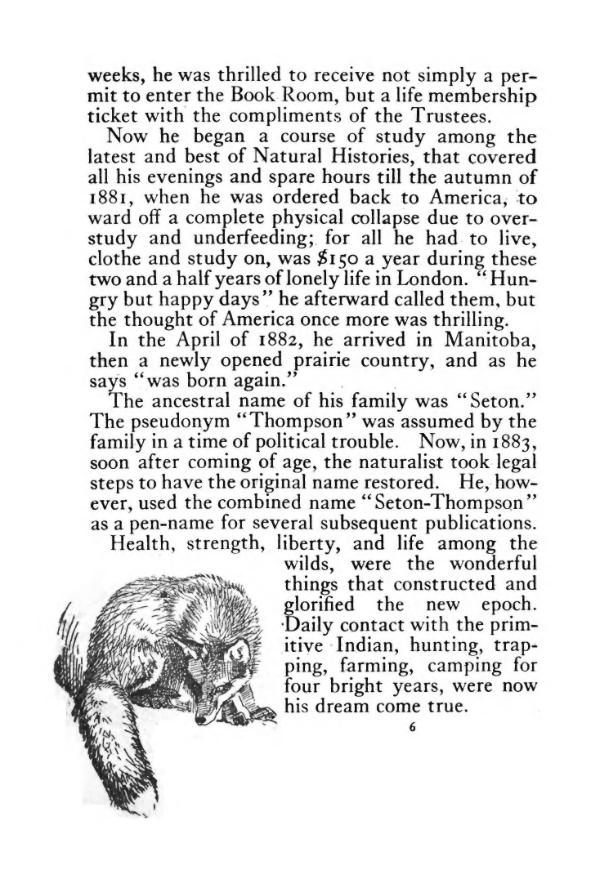