… boys in camp, I am not without hope that this may lead to a measure of long-delayed justice being accorded him. He asks only the same rights as are allowed without question to all other men in America — the protection of the courts, the right to select his own religion, dress, amusements, and the equal right to the pursuit of happiness so long as his methods do not conflict with the greater law of the land.

This book is really the eleventh edition of the “Birch-Bark Roll”, which I have published yearly and expanded yearly since 1902. On the first day of July that year I founded the first band of Woodcraft Indians. Since then the growth of the movement has called for constant revision and expansion. In the present volume, for the first time, I have fully set forth a justification of my Indian Ideal.

I am deeply indebted to my friend, Edgar Beecher Bronson, for permission to include the History of Chief Dull Knife's March, which appeared in his “Reminiscences of a Ranchman”. It is a story that should be known to all the world.

I have also to express my obligations to Messrs. Charles Scribner's Sons for permission to quote from Capt. J. O. Bourke’s writings, to J. W. Schultz for the use of his charming story of “No-Heart”, to Messrs. The Fleming H. Revell Co., for permission to quote F. W. Calkins’ story of the “Two Wilderness Voyagers”, to Miss Alice C. Fletcher for the use of two Indian songs from her book “Indian Story and Song”, as noted, to Edward S. Curtis for the use of Sitting Bull's “War Song”, to Dr. Clinton L. Bagg for help in the "First Aid," to Dr. C. C. Curtis for the identification of toadstools, to Dr. Charles A. Eastman (Ohiyesa) for general criticism and for special assistance in the chapters on “The Indian's Creed”, “Teepee Etiquette”, and the “Teachings of Wabasha I.”

Also to Robert G. Valentine (Indian Commissioner) and George Bird Grinnell of New York for critical reading of the historical parts of the book.

The section on Forest Trees appeared originally as a separate handbook called “The Foresters' Manual” in 1912. In it I aim ..text continues 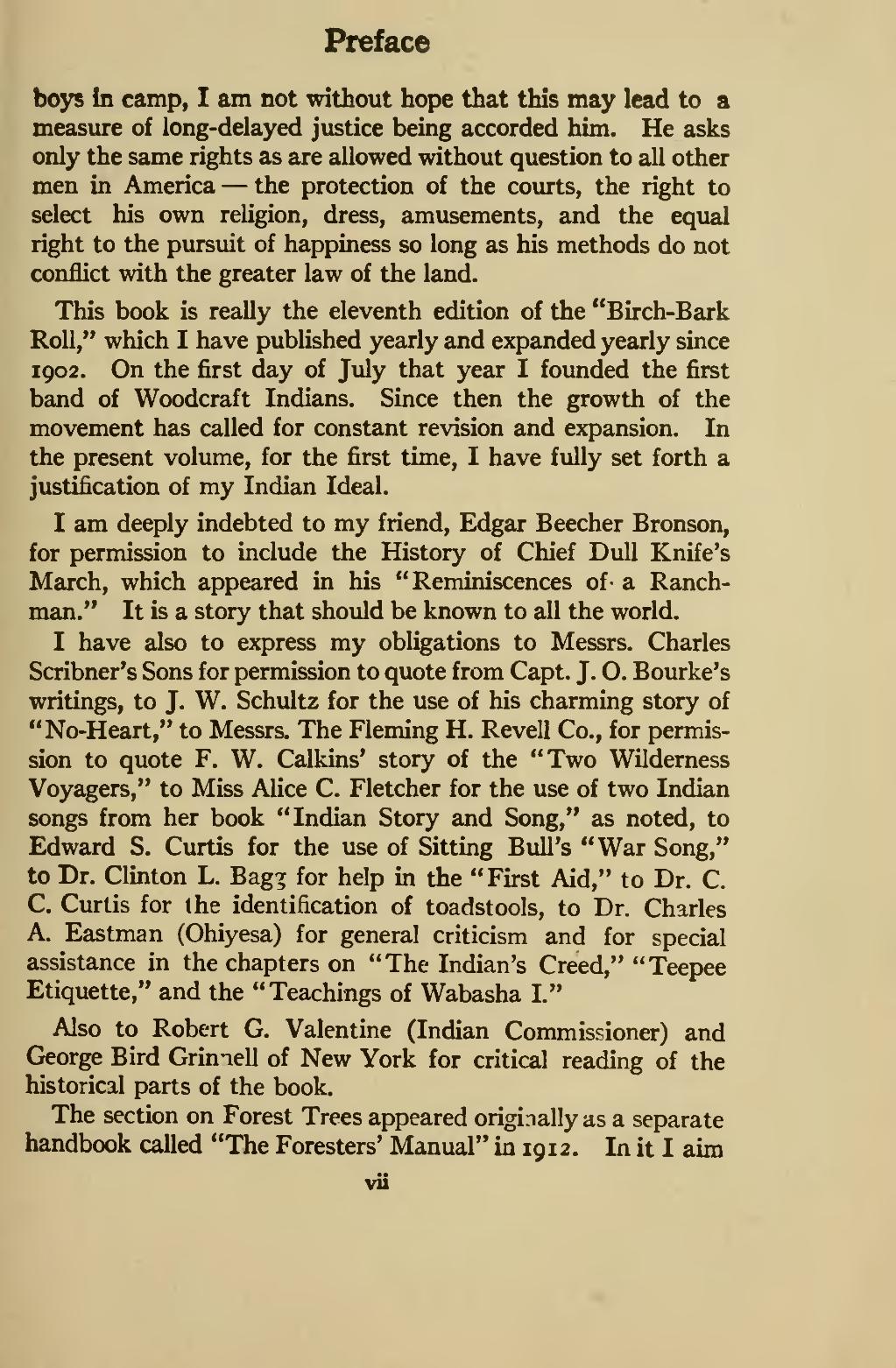