buffalo or the deer kind. The people talked about this, wondering who did it all. If the girl knew she gave no sign of it, always passing the young man as if she did not know there was such a person on earth. A few low and evil ones themselves hinted wickedly that the imknown protector was well paid for his troubles. But they were always rebuked, for the girl had many friends who believed that she was all good.

In the third summer of the girl's lone living, the Mandans and Arickarees quarreled, and then trouble began, parties constantly starting out to steal each other's horses, and to kill and scalp all whom they could find himting or traveling about beyond protection of the villages. This was a very sad condition for the people. The two tribes had long been friends; Mandan men had married Arickaree women, and many Arickaree men had Mandan wives. It was dreadful to see the scalps of perhaps one's own relatives brought into camp. But what could the women do? They had no voice in the councils, arid were afraid to say what they thought. Not so No-Heart. Every day she went about in the camp, talking loudly, so that the men must hear, scolding them and their wickedness; pointing out the truth, that by killing each other the two tribes woxild become so weak that they would soon be unable to withstand their common enemy, the Sioux. Yes, No-Heart would even walk right up to a chief and scold him, and he would be obliged to turn silently away, for he could not argue with a woman, nor could he force this one to close her mouth; she was the ruler of her own person.

One night a large number of Arickarees succeeded in making an opening in the village stockade and, passing through, they began to lead out the horses. Some one soon discovered them, however, and gave the alarm, and a big fight took place, the Mandans driving the enemy out on the plain and down into the timber below. Some men on both sides were killed; there was both moiumng and rejoicing in the village.

The Arickarees retreated to their village. Toward evening No-Heart went down into the timber for fuel, and in a thick clump of willows she found one of the enemy, a young man badly wounded. An arrow had pierced his groin, and the loss of blood had been great. He was so weak that he could scarcely speak or move. No-Heart stuck many willow twigs in the ground about him, the more securely to conceal him. 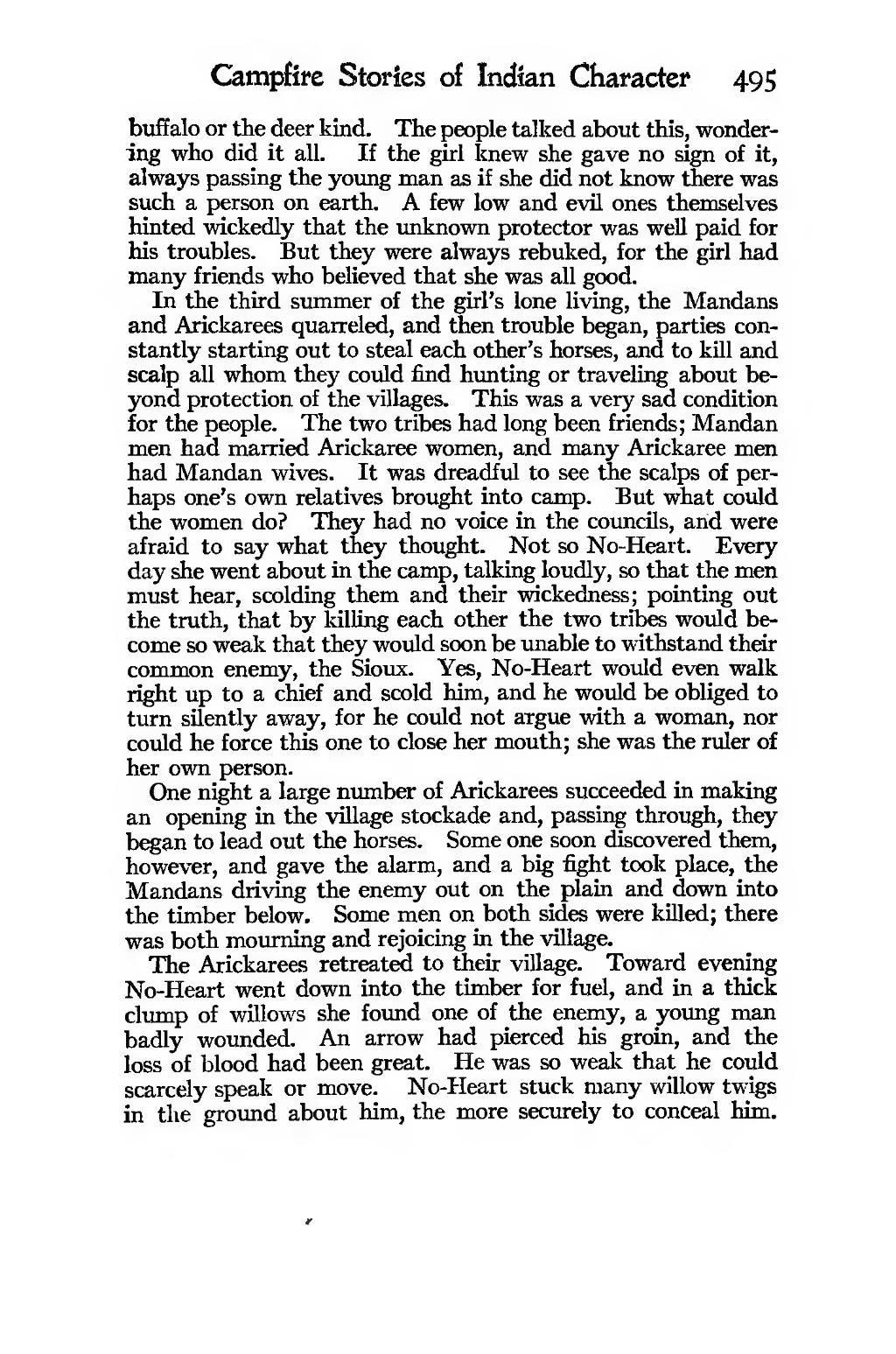