322 The Book of Woodcraft He agrees heartily with the first part of it, but asserts that no respectable medical authority will be found to endorse the other half of it. Has the editor of American Medicine, he asks, never heard of tobacco blindness? And how about cancer of the lip and of the throat, diseases almost confined to smokers? Bou- chard, of Paris, an authority on diseases of the heart and blood- vessels, names tobacco, the writer goes on to say, as one of the leading causes of this deadly class of maladies. And this is by no means a new idea. Medical examiners tell us that nine tenths of the rejected applicants for the Army are refused on account of tobacco-heart. We read further: "King Edward died of tobacco-heart. Mark Twain was another victim of this disease. A king of Hungary fell ofi his horse some time ago and lost his life because of defective vision due to smoking. The death-rate from disease of the heart and blood-vessels has increased, within the last ten years, from 6 per 100,000 to 24 per 100,000 or 400 per cent. Is there no evidence from these facts that it is not 'harmless to adults'? "No experienced coach will allow men in training for athletic events to make use of tobacco, so well known are its effects upon the heart. A well-known physician said to the writer just before the Yale-Harvard boat-race: 'I am sure Yale will be beaten, for the coach permits the men to use tobacco.' "The ill effects of tobacco upon the kidneys are familiar to all physicians. Statistics gathered some years ago showed that 10 per cent, of all smokers have albumen in the urine. The physician forbids the use of tobacco or very greatly restricts its use in cases of Bright's disease. "But even on a priori grounds it may be safely said that tobacco is anything but harmless. The deadly effects of tobacco are well enough known. In very minute doses nicotin produces deadly effects. One tenth of a grain killed a goat, and a much smaller dose killed a frog. The farmer uses tobacco leaves and stems to kill ticks on sheep. An eminent German botanist has recently shown that tobacco, even in minute quantities, produces pernicious effects on plants. "Numerous investigators have shown that pigeons are proof against anthrax, a disease very deadly to sheep. Charrin showed that after giving to a pigeon a very small dose of nicotin tjie creature quickly dies when infected with the anthrax germ. 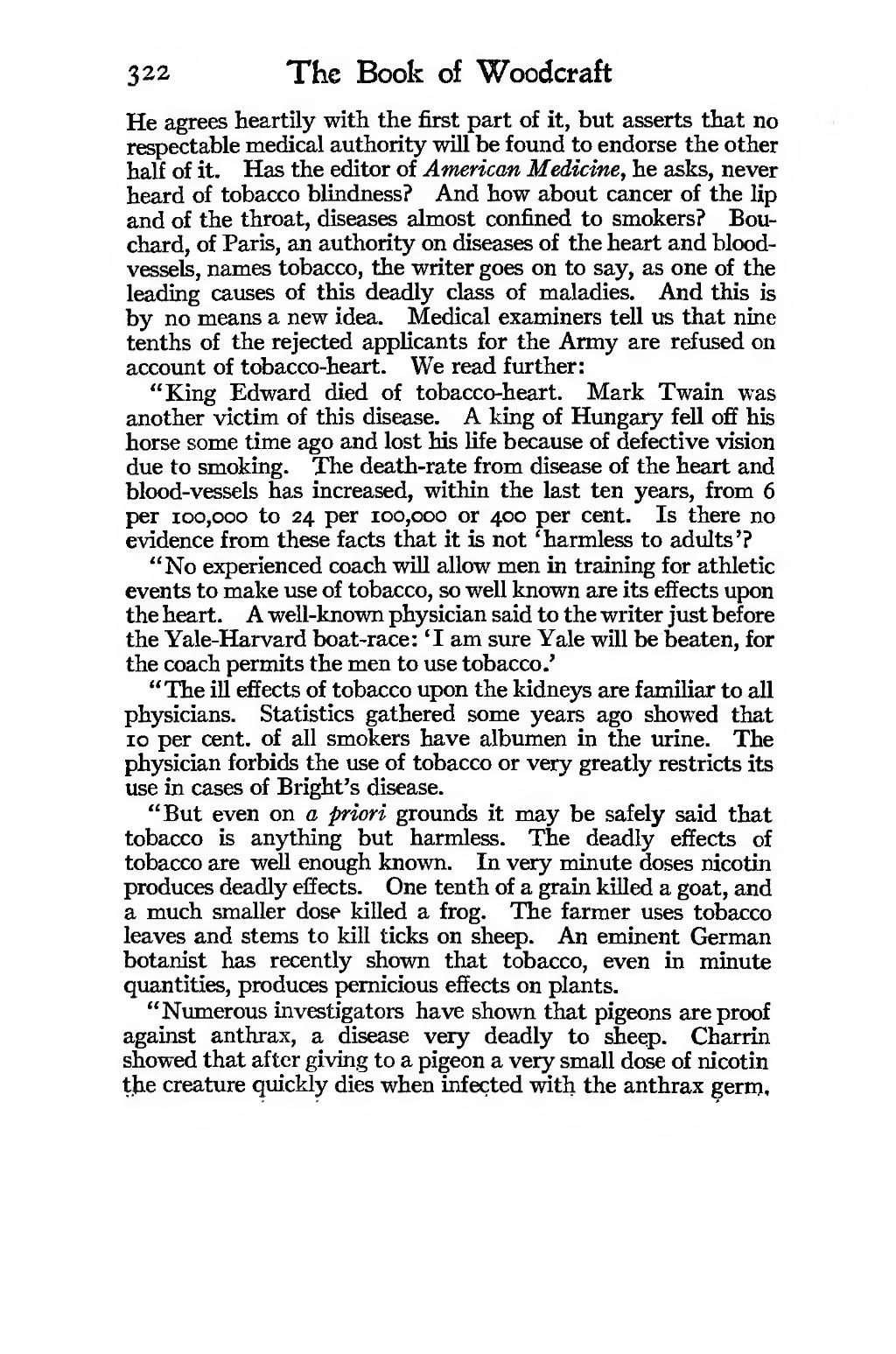