necessarily make its own organization.” On June 24, 1908, he wrote, “We are going on with my scheme like your Woodcraft Indians”.

The Woodcraft Indian idea was recast, military terms and organization used instead of tribal forms, and given to the world in 1908 as The Boy Scouts.

Soon after Dr. Gulick left the board to organize the Camp Fire Girls, and E. M. Robinson, as International Boys' Work secretary of the Y.M.C.A., organized the C.C.T.P. Each took a section of the Woodcraft Indians, and each has done splendid work with it, especially the Boy Scouts. I can only wish they had taken it all, and kept the essential emphasis upon all of the four essentials of manhood.

This I take to be fundamental. Every educational institution must recognize that its job is the harmonious development of body, brain, spirit, and service.

It is easy to find institutions that set out to develop one or another of these. But they always came to naught, or else broadened their foundation idea. The holy men of the Egyptian desert were careful of their bodies, they were scholars, they were ardent seekers after God; but they were neglecting their social duties, and they passed away.

There were orders of knighthood founded wholly for service; they passed away. The gymnasia of Greece and Rome were intended solely to develop the body. Where are they now?

The strong-built man is four-square: if we leave out any one of the cornerstones, we are setting the four-square tower on three pillars. Sooner or later it must go down.

Recognition of this fact is the foundation idea of Woodcraft. It is Indeed a plan of education and a way of life. It holds that education is the development not of scholarship, but of manhood; that is, the harmonious development of body, brain, spirit, and service. 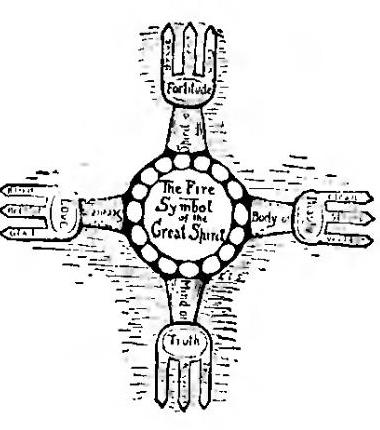 The hand painting of the Fire with its necklace of Stones, and its four lamps with three rays each symbolising the laws of Woodcraft

Realizing that the individual child must pass briefly through the same stages as the race, it plans a program to fit these stages. Since instincts are the inherited wisdom of the race, the things that guarded and developed us, it aims to meet every instinct with a proper outlet, safeguarding these ineradicable impulses, so that they are constructive, instead of trying to crush them, thereby making them destructive.

Thus the Woodcraft idea provides a plan of development for both sexes and all ages. It offers continuous growth to the individual child on lines that parallel our growth as a race. This accounts for the fact that no one is ever too old for Woodcraft. The boys who joined our tribes in the beginning are with us still, though now grown men with families.

There can be no doubt that the first really social group of mankind was about a fire. Until men got the ..text continues 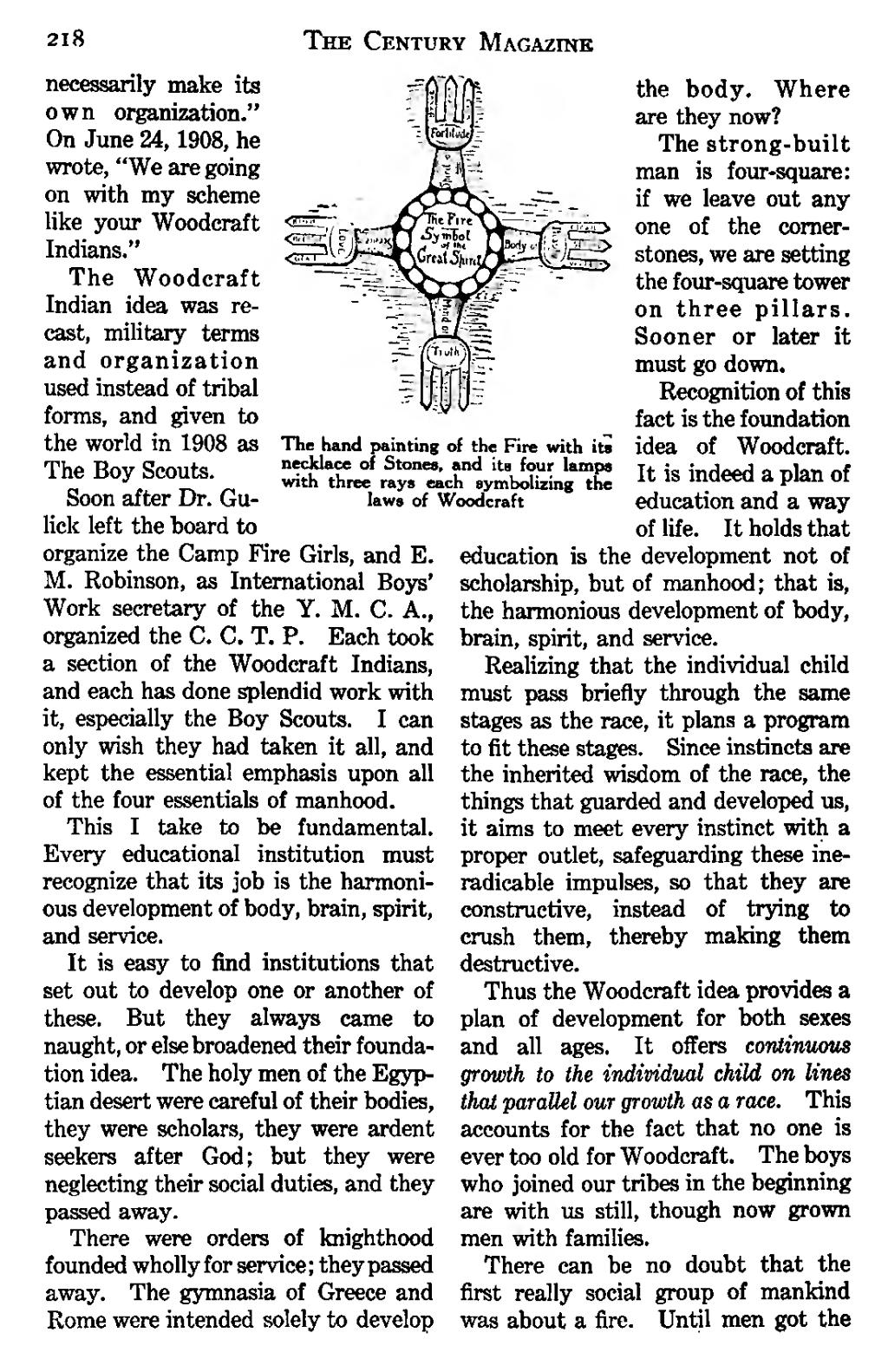